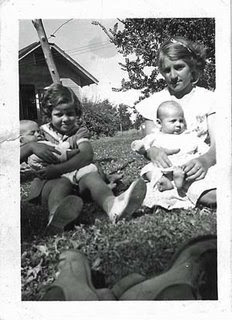 My mother was being a mother before she was a mother. That is her on the right holding her brother Ira. Her cousin is holding Ira's twin sister Erma. My mother, J. Ruth (Clark) H****, was the third oldest of 13 children and rarely recalls a time she did not have a baby on her hip while growing up. 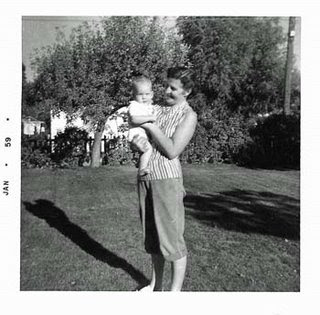 After being the sister-mother to so many siblings, my mother chose only to have two children of her own. I was the third and last (shown above on her hip) . If you are skilled in rudimentary math, you'll realize that is one more than she wanted. I was reminded many times while growing up that I was an accident, not an intention, and after two boys, she was hoping for a girl. So I grew up feeling as though I wasn't really wanted and I was a disappointment. My mother did not mean this as cruel. She made it clear that, although not planned and not a girl, I was loved. I eventually believed her.

I do not consider myself a great son. Oh, I remember my mother's birthday and I send flowers on Mother's Day, but I would not put me in the category of being a great son because I do not visit more than once a year. This is not to say I don't feel guilty about not being a better son. If my mother needed something, I would be there, but part of growing up the way she did also seemed to make her one of these really strong people that always seem to be able to take care of everything. She is 81 and still maintains her own yard and home.

My father died about 13 years ago and I've regreted not finding out more about his life from him before he died. I've decided I'm not going to make that same mistake with my mother. I've spoken several times about pursuing genealogy and my family tree. Since my father was adopted, my family tree is a bit lopsided on my mother's side. So I've decided to take an unscheduled trip back to Boise to visit my mother and talk to her about her life.

I would like to say I am doing this for my mother and to be a better son. I can't help but think, though, that it is really selfishly for me. My mother holds the living key to where I came from. And though I've heard her stories many times growing up, this time I'm going to listen and write them down.

So although I intended to make this post a tribute to my mother for Mother's Day, I'm going to hold off on the real tribute until after my journey home (probably a couple of weeks from now). In the meantime, although she doesn't have a computer, nor would she have a clue what a blog is if she had one, I want to wish my mother a Happy Mother's Day and tell her I love her (even if I was unplanned and a disappointment).
Posted by Time at 5:12 PM

I simply can't believe that your mother would think of you as a dissapointment. It doesn't ring true. we are never as "much" as we wish we were, it's part of the human condition.

Did you ever ask her why she only wanted two? It might have been simply so that her children could be children growing up, without needing to be mini-adults.

You sound like you believe it was so that she wouldn't have so much work. Given that you already think that, there is nothing to lose in asking.

I don't really think my mother thought of me as a disappointment. I think she was disappointed that I was not a girl. I think she only wanted two children because of the economics of it all.

If the truth were actually to be told (and don't tell my brothers), but I think my mother always liked me best :)

Sounds like a good plan. Should be interesting. Is Tess going with you?

Everything we do has a selfish motive. Your needing to hear your mother's stories will serve you both. It's a great idea.

My mother told me some pretty bizarre things. As a child, those things determined my self perception. It was difficult to break that off as an adult. As harmless as your mother's statement may have seemed to her at the time, it still had it's negative impact. Now you must realize that she was only trying to conceal that she liked you best. ;-)

Tess teaches so unfortunately won't be going with me on this trip.

Thanks Shandi, I know my mother didn't mean it to be hurtful. I think she thought it would be uplifting to know they loved me even if I hadn't been planned.

I know you could never have been a disappointment to your mom it is just how you heard it as a child. My son was not planned. He was the best surprise of my entire life. I can not imagine life without him nor would I ever want to. He knows we were planning on having our children 5 years apart but that God had other plans for us. The best plan for us was having him right at the perfect time. Now my daughter is 14 and my son is 13 and we could not be happier unless we could turn the clock back to before they were teenagers, grinz!! Thank you for sharing your story.

My mom is literally still with me, her ashes stored in an ornate wooden box awaiting the day I can place her at the roots of a fine yellow rose bush as she requested. I am simply thankful that I got to actually meet my Mom before she died, and find out just how unique and wonderful a person she was.

Thanks Cherish! You positive look at things is always appreciated.

THE Michael, I'm glad you got to meet your mother before she died. The roses will be a nice way to honor her.

Thanks zagu, I can now at least claim to have something in common with a cookie. :)