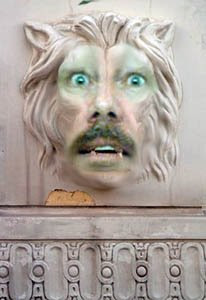 This was an odd week. Seattle whipped through some uncharacteristically warm weather, but has returned to it's watercolor gray for the weekend. I'm sort of okay with that. By choosing to live here, I accept the rain.

Pisces love the water anyway. Good thing. Pat Robertson has predicted the Pacific Northwest will be hit by a Tsunami this year. He should know. He apparently talks to god and the leaders of the Republican party.

I'm not sure what a Tsunami would do to us here. I assume it could mean I'd end up with that waterfront property we couldn't quite afford when we bought this house.

Not that I'm too concerned about Pat's prediction. I think he is pretty much full of meadow muffins anyway. Besides, Al Gore's global warming will get us if Pat's Tsunami doesn't. Or maybe it is the ozone layer that's burned away that will signal the end. And we shouldn't forget about the terrorist threat. The killer bees are probably on their way, too. But the bird flu seems to be running neck and neck with the bees.

An 80s singer named Joe Jackson I believe once wrote a song where the lyrics went something like, "Everything gives you cancer, everything, there's no answer..." I think he was being tongue in cheek. Fact is the disasters just need to get in line.

Meanwhile, I'll just face the future as best I can and laugh. Or maybe I'll roar. It's better than a whimper.
Posted by Time at 8:41 PM

That photo is perhaps the most disturbing illustration that I have yet seen on your site--and that's saying something! You've surpassed yourself, Tim.

(Hey, do you think you could paste Ed Troyer's face on some generic naked man photos for me? Just wondering...)

Everything will kill you. We are all in imminent danger. Exactly like every other human that has ever lived. No point dwelling on it. We'll die when we die. Until then we should enjoy the experience. It can be a hell of a lot of fun.

Frankly, I'm hoping nature puts us back in our place before we turn the planet into another Venus. It would not bother me in the least to see the human race reduced in numbers in such a way as to take the pressure off the rest of the species we "share" this Earth with. Like all living things, we all die sooner or later, that is the circle of life. It would be the supreme pity to see the cradle of all this wonderful diversity reduced to a lifeless hunk of rock simply because the supreme predator just HAD to drive an SUV along endless ribbons of asphalt to jobs that did nothing but make life miserable.

Kristy,
You like it? It was a gargoyle lion outside one of Brigham Young's buildings in Salt Lake City. And I think you're going to have to paste Ed's face on some generic naked man photos on you own. Even I have limits.

Lights, That's exactly what I'm saying. I just want them to stop waving it under our noses.

THE Michael, I knew you'd relate as well.

My children love microwave popcorn. The other day my husband said that he heard there is something in the bags that causes cancer. My son very disappointed said these days everything causes cancer. Very wise words from a 13 year old. Every year it is something different.

Cherish, I hope he doesn't give microwave popcorn.

Sigh. My father is convinced that rapture is coming soon.

What about the setting of America's "Land of the Free Home of the Brave" star which causes people unable to accept the sad decline to seek other explainations (like rapture?)

Or the physics that may be accounting for not only the weather changes on Earth but on many of the other planets in our solar system?

Or the possible causes of the reversal of Earth's magnetic poles (which when collapsed may leave Earth vulnerable to solar radiation for a period until the new poles re-orient?)

Or the inevitable reality that 6.2 billion people on Earth create friction as their nations and sociopathic power hungry leaders compete for survival and more power?

Won't my brother be disappointed if the rapture does come and he isn't on the list?

I'm of the school who believe that we can't destroy the world, just our species. The world will likely bounce back and deal with the next evolving organism.