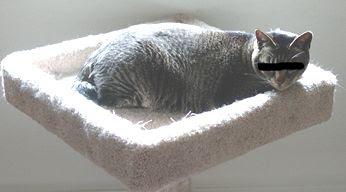 Okay, I just got through ranting about people posting photos of their cats. Hypocrisy is a sign of character.

He's not my cat anyway. He's my girlfriend's cat. His name is Keliki. She found him on a golf course in Jakarta when she was teaching there a few years ago. She shipped him back to Seattle just before she left Jakarta. He spent two nights in a box on the plane and a night in Amsterdam at a pet hotel doing god knows what before I picked him up at the airport. We bonded. Though after two nights in a box, I suppose he would have bonded with a cantaloupe. Not that I look like a cantaloupe. I've never really thought about what kind of vegetable I resemble. I guess I'll find that out later in life. Anyway, I digress.

Keliki is a pretty cool cat. He is also very fat. I call him Bubba because of he has a beer belly and likes to watch football. He is a big Seahawks fan and really thinks Matt Hasselback is a great quarterback. Though he thinks they really need to beef up that offensive line and cut down on the sacks.

Isn't it amazing what we can project on pets?

"It takes a long time to understand nothing."
--Edward Dahlberg

But I suppose that doesn't mean anything to you.