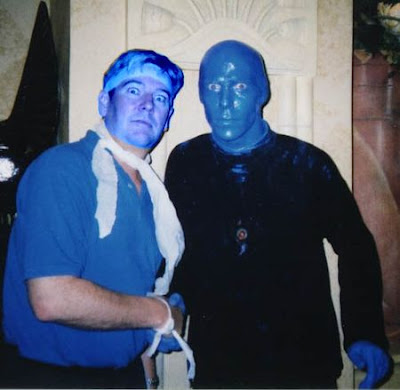 This isn't a review of Blue Man Group. Suffice it to say, I really like the Blue Man Group. A review would require me to tell you my opinion of their music and shows and act like I have a right to judge them. That would put me in the same category of those geeks at Epinions.com and by now, we all know how I feel about them. Let's just leave at saying, I personally enjoy their shows and music.

I think they have one of the best shows in Las Vegas. I've been to it three times. I sat in the Poncho section twice. The only difference there is in the Poncho section is that you sit in one of the first three or four rows and they give you plastic ponchos so you don't get spattered with paint and jello ( I guess this would make more sense if you have actually been to their show). They aren't really fancy ponchos or anything. They are more like a garbage bag with a hole for your head. You feel pretty silly putting them on at first, but then again, you feel pretty silly, too when they ask you to tie toilet paper around your head. But I'm giving away too much about the Blue Man Group show experience. Check it out yourself. Trust me, it's worth the $100.

I've also seen their Complex Tour show when it came to Seattle. Venus Hum was one of the bands that performed with them. I now also like Venus Hum. But this blog entry is about Blue Man Group.

You've got to admire the versatility of the Blue Man Group. They can entertain you with instruments fashioned out of PVC Pipe (yes there is a pvcpipe.com). They can catch marshmellows in their mouths and they can create music using Cap'n Crunch (and I'll be damned if there isn't a CapnCrunch.com as well...it comes in four flavors now). And after putting on a great show with no intermission, they wait outside and pose for photos and shake your hand. Just expect to get paint on your hand, though.

And they have great music, too. I own all of their CDs. Of course there are only two. So, actually when I say I own all of them I should just say I own both of their CDs so I don't sound too pretentuous. They are both great CDs though they never get playtime on mainstream radio. Most really good stuff doesn't. Though one of their songs was used in the last Terminator movie (which did have a pretty sexy terminator in it, I might say...the woman robot, not Arnold Schwartzenegger).

But anyway, I really like the Blue Man Group.
Posted by Time at 4:30 PM