Dunce in a lifetime 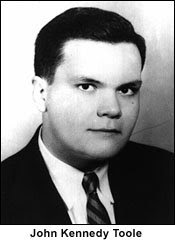 Confederacy of the Dunces, the Pulizer-winning novel by John Kennedy Toole appeals to me, not because it is a great novel, but because he won the Pulizer Prize for it post-humously after committing suicide, supposedly because no one would publish it. His mother badgered a publisher into publishing it after he died. The rest is history.

Here's a great article I found about John Kennedy Toole that is actually funnier than the book:

Anyway, I'm going to be in New Orleans in early March for a conference. I'm actually going to be staying at a hotel that was once the department store that Ignatius stands in front of during the opening scene of the book. There is apparently a statue in front of the building honoring him. Isn't that interesting?

But back to my fascination with the book. Anyone who has ever aspired to be a writer has received a rejection slip. Even I, believe it or not, have received rejection slips early in my career. Actually, that's not completely true. The first short story I ever submitted was accepted by a small science fiction magazine -- Eldritch Tales. It was a magazine I found listed in one of those Writer's Guide books that gave addresses of hundreds of obscure places to publish your works. I submitted a short story called, "The Hearse." They bought the rights to publish it for two years, I believe. They were going to pay me four cents a word. I signed the contract, sent it back and rested on my laurels for months waiting for it to be published. The magazine went out of business before it was.

From then on it was enough rejection slips to paper my bathroom. But I didn't hold on to them like some masochistic writers. I tossed them and kept at it. And today, I have this blog! So screw the publishing industry.

Good thing I have another job, though.

But, the point is, here is a genius of a writer that gets rejected after his first real novel is published (he wrote another one at age 16 that has since been published, but that is because the publishers knew they could cash in on his celebrity). And the weiner dog kills himself. Is that pitiful or what? So to mess with him, fate gets his book published after he offs himself and then really tweaks him by giving the book a Pulizer. If we could contact him through a seance, I bet the Ouija Board would spell out, "Oh, Shit..."

The moral of this story is that regardless of how many times you try and fail, you should keep trying. You'll likely continue to fail, but at least you'll be alive to catch the next episode of Dog, the Bounty Hunter.

That said, I'm going to scrounge up that short story and submit it one more time.
Posted by Time at 9:04 AM