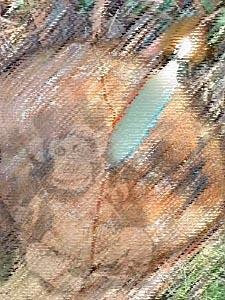 It dawned on me this morning (get it...dawned...morning) that August is the one year anniversary of when I started my blog. It was August 4, 2004 at 4:35 p.m. to be exact. And the first thing I wrote was a disclaimer that I wasn't really a rabid Elvis fan. Because when you go around calling yourself Tim-Elvis, people are bound to get the wrong idea.

But I look back on those early blogs and I see that I peaked early. I mean, that's where the Monkey Playing Cymbals got his start (now he has his own blog and doesn't even write me, the sniffling little ingrate that he is). And that's where the Log Blogs began.

Who would have thought that my unread blog would eventually blossom into a major force in the blog world with as many as four regular readers on any given day. Some people would let this kind of unbridled success go to their heads. I, Tim-Elvis, however, remain humble and unchanged. In fact, as is wont with people my age, I find that sometimes I repeat the things I've said before in other blogs. But that is just because they are so fascinating, I know you want to read them again and again.

Anyway, it is been quite the year. Since I began the blog, I got engaged, got married, sold a house, bought a house and grew a beard. And along the way, I've encountered some great people in the blog world that I've grown to think of as friends (albeit generally faceless friends that I'll likely never meet or speak to...except for my nephew R...he's family). Anyway, thanks to Shandi, Lights in the Wake (what kind of name is that anyway...Scottish?) Teri and R. for the support and reading and commenting and sharing your blogs (except for R....he doesn't blog anymore for political reasons).

I just want you all to know that blogging has taught me a great deal about myself as well. I've discovered how obsessive/compulsive and a tad narcisstic I really am. Because I find myself checking my e-mail several times a day to see if anyone has commented on the blog. I also find myself getting aggitated if I log into my favorite blogs and they haven't posted anything new.

Then I quickly get distracted by bright, shiny objects and forget about it.

Anyway, who would have thought that one day I'd be engaged in an activity with a name that sounds like a marathon taking place in the swamps of Louisiana. Here's to the blog world! May we not go the way of the Dot.coms.
Posted by Time at 7:11 AM

It is amazing how this takes hold. I've only been doing this for six weeks (to the day) and I'm always looking to see what's new in the blog world. I like it!!!
Keep up the good work!

It's spelled "lights in the wake" but pronounced "Pete". Go figure.

I have enjoyed reading your blog very much. It's part of my daily routine now. So thanks for that. But I must object to your saying I am generally faceless. I'll have you know I am specifically faceless.

Thanks Teri,
Happy six weeks anniversary. May you continue for 46 more!

And damn Lights, I feel as though Batman just took off his mask in public...specifically speaking.

I've been enjoying your blog, too (especially when you write about implants).

Tim: Happy anniversary. As I recall, I was one of your first readers. I have always enjoyed your blog. Yours is completely and specifically unlike any other blog out there.
Here is a present for you.... Actually we've considered telling you this months ago... but here goes.....
Lights in the wake, otherwise known as Pete, is a very close personal friend of mine. He chose "lights" to use while posting on my blog hoping that I would immediately recognize it as him. He discovered your blog shortly after entering the blogosphere. We work together and discuss your blog daily.
Keep up the great writing.

I have to say though... My favorite posts of yours were the series of e-mails from the african scam artist. I bout died laughing.

So I guess now it's like batman stripped naked in public and started farting the star spangled banner.

I especially thank you Shandi. You have been visiting Dizgraceland almost from the beginning and I feel as though you deserve a spare key to the mansion (there was a young lady named Lili from New Jersey who raised pet spiders who was the first visitor to my blog, but I think she got pissed at me during the presidential election because I compared George W to the kid playing banjo in Deliverance). I'm glad you liked the Spam War letters. They were one of my favorite posts. I also take it as a compliment that my blog is unlike any other blog out there. This would explain my popularity.

You know, I figured when Lights started his blog and I saw that he was a social worker in California that you must work together. I'm not sure I can get used to calling him Pete.

Well for Pete's sake. Thanks for that imagery of Batman stripped naked farting out the Star Spangled Banner. But you are going to have to break it to the Mank with the Spank that you aren't really Stephen King.

You don't have to call me Pete. In fact I'd prefer Lights. I just wanted to tell you this stuff cuz you were right. We are friends now. In an odd, internet kind of way, I guess. Still, it feels like friendship. So I wanted to kind of introduce myself. I hope the reveal will not detract from the fun.

And sorry about the batman thing. But once I thought of it I couldn't resist. (I was picturing Adam West's Batman, if that helps)

Lights,
Thanks, your secret is safe with me and hopefully anyone else in the world who actually reads these comments (but if you are in the witness protection program, your cover is blown).

And picturing Adam West naked farting out the Star Spangled Banner actually exacerbates the visual image. I will have to spend a great deal of time picturing my happy place to get rid of the visual.

But I forgive you. That's what friends do.

I read your blog because it's a nice opportunity to get to know you in a medium I'm comfortable in. I understand that the blog can be superficial but even it provides more insight than the two hours every other year the family shindigs allow.

As for why I don't blog: The man who wishes not to be overheard says nothing - and the Man is listening. Actually, I don't blog any more because I've written all I have to write. I'm busy living, learning how to be a husband and doing shots of vodka after an exhausting week of college.

More power to you nephew. I'm glad you stop by.