What is the bogeyman afraid of? 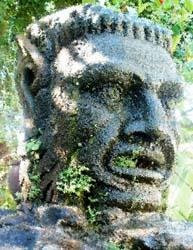 Tess called out yesterday that there was a spider on the ceiling the size of Rhode Island. I came out of my office and she was staring up at this spider that was pretty damned big. But it was just sitting there staring back at us. "Should I get rid of it? " She asked. She was getting ready to go to a conference that morning and was heading out the door.

"I don't think it is big enough to eat the cats," I replied. Tess rolled her eyes and and kept one of them on the spider as she scurried out the door.

That evening I was sitting in my office again and I heard Tess call out that the spider was still there on the ceiling. Then I heard a shriek. I assumed that she had dispatched the poor thing or it had made it's move. She came into my office shaking her head. "The spider was on the ceiling and it shook a leg at me and opened up it's mouth or mandible or whatever you call those things. I went into the kitchen to get a paper towel to take it outside with, came back and it was on the floor dead."

It dawned on me that the spider was probably more afraid of us than we were of it and we had likely scared it to death. I wondered if that was the case with most things we are afraid of. Or at least the living things we are afraid of like spiders, insects, mice, etc. Even larger creatures like bears and mountain lions seem more often than not more in a hurry to get away from humans than humans are to get away from them.

But what about the imaginary or supernatural things we are afraid of, like the bogeyman. Is the bogeyman laying there under the bed scared to death that you'll look under the bed and find him? Or is he cowering in your closet hiding behind your clothes because he's also afraid of the dark.

I carried on similar debates with myself as a kid. I wondered if I would be as afraid of what was under my bed if I actually hid under there myself. I even conjectured that maybe, if I was actually the bogeyman, then I wouldn't have to be afraid of him anymore.

And that leads to our fears of tangible things that pose real threats like muggers, terrorists and the like. What are they afraid of? The police? Capture? Death? The bogeyman?

Most of my life, I've had almost an unnatural fear of someone breaking in my house. No one ever has. And I don't really have anything much that someone would want to steal. But still my dreams are haunted with nightmares about unlocked doors and broken windows. Shadowy figures that I can never quite make out are lurking outside the door. And the slightest noise at night makes me sit up and listen, wondering if an intruder has broken in. But it is always just one of the cats.

One time, several years ago, there was a pounding at my door at around 2 a.m. I immediately jumped up, pulled on a sweatshirt and ran downstairs. My heart was pounding and the adrenalin was pumping. I shouted out, "Who is it?" I hear, "It's the police, open the door."

This was like a bad movie plot. I resisted the urge to holler back, "Show me your badges," but I knew the patented response would likely be, "Badges, badges? We don't need no stinkin' badges." So I opened the door and this big county cop stepped in. My brain was still trying to sort out why I was standing downstairs at 2 a.m. with a cop in the living room. I nervously asked the cop what seemed to be the problem. He said that they had a report of a prowler in the neighborhood and asked me for some ID. I excused myself, grabbed my wallet off from the dresser and returned with my driver's license and handed it to the cop. He looked at it, wrote down my name and license information in a notebook and handed it back to me.

My brain began to kick in, nudged me and whispered that the cop wasn't there to ask me if I noticed anything suspicious. He thought I was the prowler. I began to feel a little indignant. The cop began asking me if I had been outside. I told him I was asleep. He then took on a little more threatening tone and told me that I wasn't asleep. He claimed he saw someone pull aside the drape and look out when he was walking up the sidewalk. I looked down at the cat who sheepishly slipped out of the room.

I began to protest, but the copy just shook a finger at me and warned me to stay inside my house. Then he left. I stood there shaking with anger that I'd been woken up, asked for ID, then accused of prowling around the neighborhood, all while standing in my own house, barefoot in shorts and a sweatshirt.

Of course I called the precinct the next morning and complained to the cop's supervisor. He said that the neighbor had called the police complaining that someone was prowling around their yard. He explained that the cop had arrived and claimed to see someone duck around the corner of my house when he approached and then saw someone looking out the window at him a minute later. So he was justified in confronting me. I protested that the cop had accused me of lying to him in my own house and the leutenent on the phone simply responded that, unfortunately, lying was a pretty common occurance for most police.

To make a long story short, I talked to my neighbor and she said that they had seen the guy who was the prowler and told the cops it wasn't me. Turns out it was some kid that had the hots for their teenaged daughter and was hanging outside her window.

I understand that the cop was just doing his job, but it made me realize how vulnerable I was even in my own home. There was definitely an air of "guilty until proven innocent" in the whole situation.

The irony of this story was that the intruder of my nightmares turned out not to be a criminal, but a police officer. So now I've added them to my list of things that go bump in the night.

But I can only imagine what, and how many things cops are afraid of, too.

It's a paradox, don't you think? Everything we are afraid of likely is afraid of something else, even the bogeyman.
Posted by Time at 7:53 AM

Yes, what a paradox. That's a great post. I could even heard you and the cat giving each other what for.

Thanks, Teri. The cat and I have had many of those types of conversations :)

Those that fear nothing are dangerous. Got me thinking about what I fear. As a kid I feared the devil and his demon minions my mother assured me where waiting at the edge of my shadow to tear at my soul and drag me to hell. Bit frightening.. yeah.
Now... hmmmmmm....
I fear something happening to my children... my ex dying in Iraq and my son grieving for the rest of his life... ohhhh and electricity and cockroaches (I have an unnatural fear of them).

Yes, those without fear are dangerous (and often stupid). I was raised a Christian Scientist and we weren't taught to fear the devil per se. When we were sick it was referred to as an "error in thinking." My mom shortened it to just "error" which I quickly begin to think of as the devil. So I was afraid of "error" growing up.

Now a devil and demon minions waiting at the edge of your shadow to teat at your soul and drag you to hell is a bit much to lay on a kid.

I think all of us generally have a fear of things happening to our family. And bugs...except those idiots that eat them on fear factor.