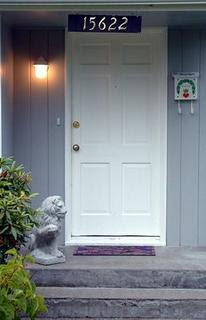 We signed the final papers to sell my old house on Wednesday. It was a legal formality. We've been in our new house for more than a week now and the old one is completely empty.

I didn't really think I was feeling anything emotional about the place. So much has gone on over the past few months that I really haven't thought much about what it would mean to actually close and lock the door for the last time.

So Tess and I drove over to the house Wednesday night for the last time. I took my digital camera and walked from room to empty room taking photos. I'm not sure why I felt compelled to take the photos. Maybe it is because I know I'll never see the inside of the house again.

As I moved from room to room, all of the memories of being in the house seemed to come alive and slam into me. I mean, good or bad, I spent 18 years in that house. Between refinishing floors, painting walls, laying tile, dealing with broken pipes, and replacing toilets, you put a lot of yourself into a place. But those are the physical things. There were the friends and family that had passed through and of course, since we know I am a cat person, my pets.

I walked through the backyard and up to where I'd buried my cat Cuervo. He was a big orange tabby. He died about six years ago. He was about 14 years old. Everyone in the neighborhood loved him. He was never the brightest bulb in the socket but he had a good heart. He had a tendency to get stuck up in the same tree over and over an never figure out how to get down unless I climbed up after him. Generally he would be so scared when I pulled him off the branch that he'd scratch me in the face. He also had a nasty habit of spraying around the house in odd places. Once he even sprayed in my Elvis shrine. It pissed me off, but pet owners tend to accept these flaws in their wards the same way parents accept children.

Cuervo was also one of the most loving animals I knew. He loved everyone. And in the down times when I felt like I didn't have a friend in the world or had just been dumped by a girlfriend, Cuervo would always climb up on my lap in the barcolounger and watch television with me. And when I came home from work, he'd usually be waiting for my by the front door next to a stone lion I have.

I found him one day sitting in my driveway bleeding from the nose. I rushed him to the vet. He died two days later of kidney failure. When I went to pick him up, they'd put him in an old cardboard box and placed a flower on top. I didn't have the heart to open the box and look at him or put him into something more appropriate. I took him home, dug a grave in the backyard and cried as I placed a slab of marble over the grave. 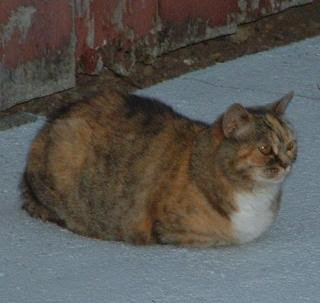 As I opened the patio door to the backyard to visit Cuervo one last time, I noticed a calico cat sitting there waiting. He remained motionless, watching while I walked past him toward Cuervo's grave to say goodbye. Then the calico slipped silently away.

I paused and silently said goodbye to Cuervo. And it dawned on me that maybe cats are reincarnated, too and the calico was Cuervo saying goodbye to me as well. Or at the very least, the calico was the messenger.

I went back inside and Tess and I walked through, turning off lights and then locked up the house for the last time. Before we left, I asked her to take a photo of me on my steps for the last time. For a moment, I faced the front door and fought the emotions that were bombarding me. I tried to force back the unmanly sobs that were coming out of nowhere. Tess came up and hugged me. Finally I regained my composure. I turned and smiled for the camera. 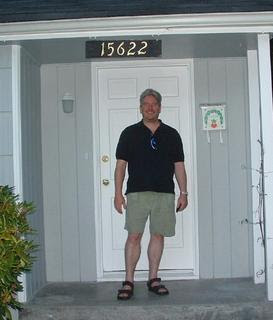 Then we got into my truck and drove to our new home.

Ohh...you made me cry. I can't amagine 18 years in one house.
The longest time I've ever been in one house was 6 years and that was very hard. It was also ending a 21 years marriage, so there was good and bad that I was leaving behind.

Meanwhile now we have a face to the man tim-elvis...Nice looking man.

Hi Teri,
Sorry, I didn't mean to make you cry. It was a bittersweet thing for me to leave the place. But it is good to be in our new home.

I can't even imagine what it must have been like to deal with ending a 21-year marriage. From reading your blog, though, it sounds like you are moving on and taking care of yourself.

Thanks for the kind words about my photo. I'm blushing :)

And welcome Jordi, thanks for stopping by and reading the blog.

Sorry about your cat. I had to put down one of my cats last year. She was 14 as well. Her brother is still with me though. But at 16 I don't think he's gonna go much longer either.
Now, about the cat getting "stuck in a tree". I can't believe you fell for that one. It's one of a cat's favorite games. Pretend to get stuck, make your human come get you, then scratch the hell out of him. My cats used to play that one with me all the time. Until they got too fat to climb trees.

Thanks Lights,
It's the hardest part about having pets.

Cuervo stayed up in a tree once for four days before I climbed up using a ladder on the back of a pick up truck bed to reach the lowest branches. I tried calling the fire department, but they explained they really didn't ever get cats out of trees. Am I stupid or what.

Was that a rhetorical question?

In a metaphorical sense, yes. Plus there was a little bit of self-deprication thrown in for good measure. But thank you for asking? Or was yours a rhetorical questions?