Pan: God of shepherds and flocks, son of Hermes and a nymph. Pan was born with the legs and horns of a goat, which caused his own mother to spurn him. Nor was the adult god more popular with the nymphs. One ran away from him and was transformed into a reed, which inspired Pan to invent the shepherd's pipe of bound reeds of varying lengths. Pan was considered to be the cause of the sudden fear that sometimes comes for no reason, especially in lonely places. That's why it's called "panic".
--www.mythweb.com

Gods of Hellas, gods of Hellas,
Can ye listen in your silence?
Can your mystic voices tell us
Where ye hide? In floating islands,
With a wind that evermore
Keeps you out of sight of shore?
Pan, Pan is dead.
. . . .
[Elizabeth Barret Browning

Pan is supposed to be one of the few Greek gods

that actually died. This is an anomaly because one of the perks of being a god is that you are supposed to be immortal. But in the First Century AD, Plutarch (a priest at the Temple of Apollo

at Delphi and a Greek historian) wrote about an Egyptian ship pilot name Thamus being hailed by a voice while passing the island of Paxi. The voice said, "When you come opposite to Palodes, announce that Great Pan is dead

...and oh, could you pick up some dry cleaning for me while you are there."

I made up the part about the dry cleaning. The part of the story about Pan being dead was supposed have been true, though.

But that story planted the seeds that the great god of shepards and legendary lecher was dead. Someone got his goat, so to speak.

Despite his death, I always kind of liked Pan. For one reason, Tom Robbins

resurrected him in his book, Jitterbug Perfume

. And I really liked that book. 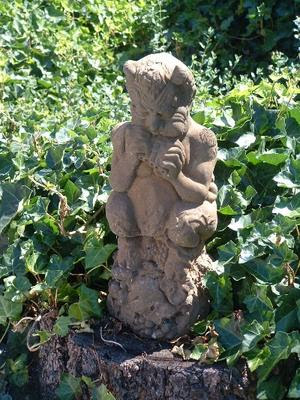 I am fascinated by the fact that Pan is supposedly responsible for that sudden fear we get in lonely places. I never knew that until I started writing this blog entry and looked Pan up on the Web. But it makes sense. Because Pan has always symbolized to me a certain animal side of ourselves that we deny because we've become civilized.

I have a statue of Pan that currently occupies my backyard and sits on one of the stumps of the trees that have been the source of inspiration for many of my blog entries. He sits there off from the patio surrounded by the invading ivy and plays his reed flute. And in a couple of weeks, the movers will pack Pan up and move him to our new backyard where I'll put him under a tree.

Because I don't believe that Pan is dead.

And I think he may show up in a story of a killer bunny....cavorting. 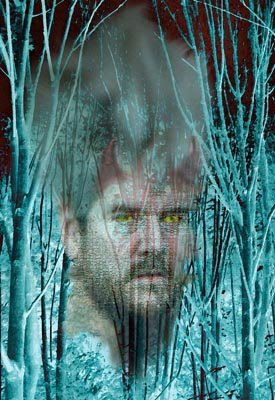 Hey, I am definitely cool with Pan cavorting. Hell man, that's his act, it's what he does.
To recap then: you've got a cute little sociopathic bunny. You've got frolicking and cavorting. (Have you considered romping? I think a little romping might be a nice touch. But you're the artist, I'm just throwing it out there). You've got the god Pan. And you've got an easter bloodbath. Now all you've gotta do is connect the dots.

Hmmm...romping...yes, I like that. Perhaps the bunny is a Pan disciple that is using human blood to bring the god back to life.

I'll just put all of this new information in the ol' barrel and see what ferments.

So... thought provoking post.... so is there any correlation between Pan and Peter Pan?

J.M. Barrie, the author of Peter Pan, derived Peter's last name from the god Pan. And although he doesn't have the legs of a goat, Peter does ride on a goat and he plays the Pan-flute an instrument Pan invented from hollow reeds. And one essay on Peter Pan points out:

"Like Peter, the god Pan is a contradictory figure. He haunts solitary mountains and groves, where he's quick to anger if he's disturbed, but he also loves company, music, dancing, and riotous celebrations."

The primary difference between Peter Pan and the god pan was the lechery part. Peter avoided adult mysteries like the plague.

Read "The Magic Circle" by author Katherine Neville who also wrote "The Eight". There is chapter that gives you the story about Pan being dead in relation to the crusifiction of Jesus that's interesting. pg. 36 under heading "Sunday" to 42.

Thanks Anon. I'll check it out.