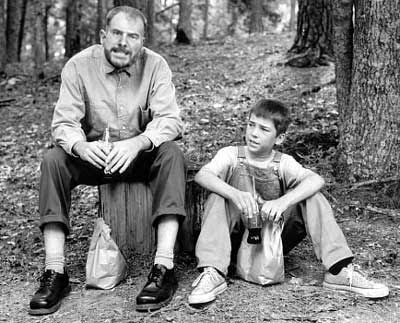 "Some folks call it a sling blade, I call it a kaiser blade...hmmm."
Karl, Sling Blade

Sometimes it's not what you say, but how you say it that matters. I could listen to Billy Bob Thornton's character in the movie Sling Blade talk for hours and be entertained. He reminded me of the way my uncles sounded when I was growing up. They didn't say much, but when they did it rolled off their tongues in a simple country fashion that was soothing to me as a boy. And when they spoke they cut right to the chase.

There is something to be said in using economy when it comes to words. I think it is okay to have an impressive vocabulary. I just don't think it is always necessary to use it. It's part of the difference between Journalism majors and English majors.

Instead of saying "I really like potatoes sliced into verticle slices about a half inch wide, deep fried in vegetable oil and served with salt," just say what Karl in Sling Blade said: "I like them French fried potaters."

In that way, I consider myself a simple man. Sometimes you just have to say what you have to say and shut up. There are lots of radio talk show hosts and pompeous bloggers who could benefit from that approach.
Posted by Time at 10:09 PM

Oops, I fear I might be one of those people who blather on and on.....so I think I will just shut up too.

I came looking for a gnome in a speedo (or perhaps you in a coffee cup if you've got the guts). Instead, I get my all time favorite movie character. This is my new favorite photoshop of you. Where do you get all these different photos of you. Surely you didn't have a photo of you with that expression on your face. I love it... absolutely love it! As for pompeous bloggers, I wouldn't have the faintest idea what you're talking about. I never drone on and on. I choose my words carefully and I immediately get to the point anything more would be superfluous, excessive, and extraneous. I am never redundant. I say it once and move on. And I ... and ... well...

You mean, there are pompous bloggers who are in love with the sound of their own words who blather on incessantly about absolutely nothing and yet make it seem like it's the most important post you'll read till they post yet another 5000 words of such monumental greatness that it forever changes how you view your pathetic ramblings?

Steve, AW/OW
I've never considered either of you pompeous. Steve, you are incomprehensible at times, but never pompeous.

Shandi,
I did better than a Speedo. It's a thong...please don't tell me you missed the masthead. I know it is pitiful, but I did have a photo of me with the Sling Blade expression on my face. And you know who the pompeous blogger is.

Blaznfyre,
So you've read a certain blogger whose favorite topic is freedom? :)

OHHHH MY EVERLOV'N GOD!!!! I had to refresh the page to get it. I choked on my hashbrowns. That is FABULOUS. You are the most brilliant freak EVER!!! The photo is disturbing, the coffee cup is a perfect, even the "Dirty Donuts" is just wonderful. Haaaaa haaaaa!!!

Ohhh and be careful, someone may just write a nasty (long and rambling) blogpost about you.

Well it's about time! I have to admit I used a body double. Hard to believe I know. Glad you likey!I may keep the masthead for awhile.

And I can't imagine anyone writing a long, nasty blog post about me. I wasn't referring to any particular pompeous blogger who foams about freedom. :)

Thank God, you used a body double. I was trying to think of a nice compliment. Something along the lines of, "Your thong accents the color of your contact lenses." I couldn't come up with anything that didn't reak of insincerity.

I think you should leave it for a while. While shocking and funny, it is quite visually appealing.

Are you denying a reference to a particular blogger. Ohhhh maybe it was unintentional. Maybe it was an accident. I do recall seeing a few paragraph breaks.

At least it's "dirty doughnuts" and NOT "dirty dognuts"

Blaznfyre, Froth or foam, doughnuts or dognuts, thongs are wrong. :)

Well Steve, if you wear thongs on your feet, I'd hate to see what you wear on your ass...literally. :)

Gee I hate it when there's a good bitch session going on and I can't join in. I think I know about who you speak, I reckon the incident that sparked this discussion was going on just as I joined the blogosphere, but I'm not sure......

omg! you took the challenge! My coffee ended up spit all over the screen!

Just so you know, my masthead took me hours... I mean HOURS to complete. I certainly hope yours took a while. If you put that together in under an hour... well... you should really be making millions somewhere. Some of the ideas that have come out of this blog have been absolutely first rate.

Angel w/o wings,
It's not really a bitch session. Just a little tweak at some bloggers I used to know who I felt took themselves a bit too serious. Just having a little bit of fun :)

Hayden, I judge how well I've done by the amount of coffee I can get to come out of your nose :)

Shandi, The difference between your work and mine is that you are an artist and I am a hack. Down and dirty art is my specialty (no pun intended). But what do you mean SOME of the ideas that have come out of this blog are first rate :)

Yeah I know Tim, just having a lend of you (do you remember what that means?)......Just in case, its Aussie for teasing you....LOL

Honestly Tim, the things that you & Shandi do with photoshop are VERY impressive.

I don't have it.
Wouldn't know how to use it even if I did.
But I do so enjoy seeing your creations!

I know you've put your head on lots of things in the past but it's pretty convevient you were able to find a body double in a thong standing in a giant coffee cup. There's all sorts of weird things on the internet huh?

Also, I notice that the post starts with #600. If that means that this was your 600th post then congratulations.

"Some folks call it a doughnut, I call it a small toroidal fried cake, hmm"

Angel w/o wings, I assumed you were lending. :)

Lights, I know what you are trying to imply, but all I had to do was go to uglyguyinthongstandinginacoffeecup.com. And yes, this was my 600th post. Thanks.

Some people call it a blog, I call it slingbullshit...hmmm.