Cut: A run with the scissors 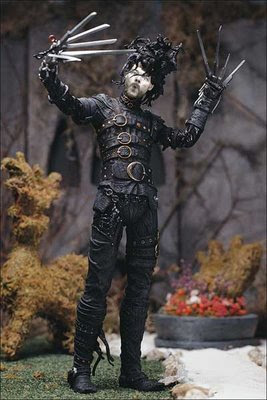 Tess bought us tickets to the stage production of Edward Scissorhands as an anniversary present. It's nice to see live theater now and then, but in all honest, this one should have stayed dead.

I loved the movie Edward Scissorhands. It was quirky and had a nice bittersweet storyline. The stage production is based very loosely on the movie. It is billed as a musical version. The thing they don't tell you is that is entirely without dialogue or singing. It's like watching a musical performed by mimes or worse yet, a ballet. If you had never seen the movie, you wouldn't have a clue what was going on. It would have just looked like spooky looking guy running with scissors while chased by the cast of Happy Days.

This is one version of Edward Scissorhands that should have been full of cuts, but by the director.
Posted by Time at 11:41 PM

I enjoyed the movie. Thanks to your review, I'll be sure to not go see this show if it ever comes to a Montreal stage. I hate it when they mess with something good.

You know, maybe it's a good thing Tim Burton doesn't translate well to the cabaret format.

Can you imagine what we'd get if this succeeds? "Batman: The Musical", "Frankenweenie On Ice," or even "Ed Wood: Composed!"

And you know who would be next, doncha'? "Pulp Fiction: The Musical!"

So, how did you really feel about the show, Tim?

FP, I kind of like the idea of a musical version of Pulp Fiction. The scene in the basement of the pawn shop would be particularily interesting.

Kristy,
I think it is really worth the money for you to go see if for youself. Be sure to take the whole family too.

What a cutting review!

So it wasn't a cut above the rest then?

What a shame it turned out so poorly, especially after Tess came up with such a great anniversary idea ... I just took FP to see Amadeus at a local playhouse and it was wonderful. Tell Tess bravo for the idea :) JP

Tim, Hayden, 'snake: Youse guise are so sharp, it hurts.

(JP's right, though, it was a very idea. Too bad about the show.)

Steve, I believe Monty Python is in reruns on PBS. Though the musical version of Holy Grail is on tour. I would hope it had lyrics.

JP, It was very sweet of Tess and I am not in any way trying to take away from the thoughtfulness of the gift. She did sleep very peacefully through most of it, though.