A dark and stormy knight 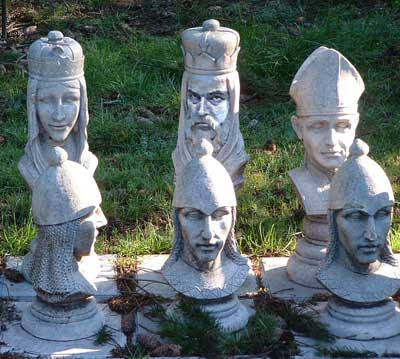 When I was in junior high, I somehow became the president of the chess club. I had joined because I wanted the service points so that I would be eligible for this award they gave you at the end of your 9th grade for school service. In retrospect, I'm not sure why I wanted the award. It turned out to be a modest trophy that is now somewhere in a trunk. I am sure there are thousands of such abandoned trophies gracing the shelves of thrift shops the world over. After I die, I'm sure mine will join them.

I became president of the chess club because the other geeks in the club elected me. But hey, as Lucifer once said, it is better to rule in hell than serve in heaven. I accepted the office. I never quite got into chess club. We came together once a week on our lunch hour and played chess. It seemed a rather pointless thing to form a club around, but one of the faculty -- a teacher who bore a striking resemblance to Kramer on Seinfeld -- thought our school needed a cerebral alternative activity for the sports impaired to engage in.

I was the chess club president and I could play chess, but that is about all there was too it. I was never one of these people who could focus on strategies and styles when it came to playing chess. I've never been much of a planner that way. I tend to approach most things with a kind of random logic that I'll know what to do when the time comes. Most of the time it gets me by. It works in chess as long as you are playing other mediocre players. And fortunately the East Junior High chess team didn't attract any heavy hitters.

I bring this up because I believe that my predisposed aversion to actually planning anything is just as good of a life philosophy as that of following a road map for success. While the rest of my collegues were on career paths, I was meandering around in the bushes. Ironically I'm pretty much as far along as the rest of them. I just didn't have to bust my hump to get here. But then again, I also set my sights on mediocrity and trusted fate would eventually lead me there.

As one might expect, this is the same philosophy I use when I approach blogging. It is the very unstructured nature of it that makes it my kind of medium. I tried my hand at short stories and novels and got a bit distracted by the requirements of following a storyline. I like the blog world much better. All you have to do here is throw something up on the wall and see what sticks.

So I guess that is pretty much check mate, mate.
Posted by Time at 9:04 PM

I learned a long time ago that you can plan all you want but in the end life just gets in the way and steers you on a predetermined path. Well thats what I believe anyway.

Now I just go with the flow and hope that once in a while I'll get what I want. Mostly I do, sometimes I don't. Its good to not always get what you want, it keeps you humble.....

I'm always blown away by peeps that set long and intricate strategies to accomplish something. Often seems to me that they get blinded by their plan and fail to see the easier path opening up and meandering right through a pleasant meadow and on to the goal.

your blogging style is well-suited to the medium.

AWOW,
John Lennon said, "Life is what happens to you while you are making other plans."

Hayden,
"your blogging style is well-suited to the medium"
I'll take that as a compliment.

I'm with you on the not planning my life issue. That's why I've always hated to be asked "Where do you see yourself five years from now" a job interviews. Luckily for me I haven't had to interview for 10 years so it worked out great.

Lights, You and I should start a "Lower the Bar" club. I'll let you be president. When we get around to it, though.

Your blogging must be ok I keep coming back......
Hmmmm not sure if that is good or bad.
bugga!

Steve,
And who knows what evil lurks in the hearts of men?