Sketch me if you can 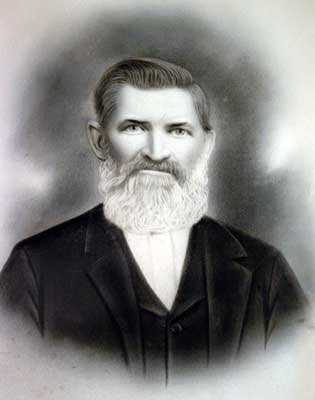 Does a photograph contain anything of the subject, or is it just light frozen by chemicals or electronics? What can you tell about a person just by looking at their picture? Can you tell if they are kind? Evil? Cold? Compassionate? In that split second they posed for the camera, what is going through their mind?

Obviously I am fascinated by photographs. I grew up in a time where a box camera was pulled out of a drawer for birthdays, holidays and visits by relatives. My past is captured in blurry black and white.

The portrait above is of my great, great grandfather George D. Knox. He was born in Ohio in 1830 and died in Boise, Idaho in 1911. Obviously I never knew him. All I have are three photos of him including the one above. I know he served in the 19th Iowa Infantry during the Civil War. He was a farmer after the war. He married Amanda Knotts in 1870. She was 20 years younger than him. They had six children. One was my great grandmother. She died when she was 19 years old and my grandmother was raised by George and Amanda.

That's it. Whatever else I know about him has to come from looking at his photographs. But who was he? I stare into his face and wonder if I am like him. Part of his DNA is mine. Whatever legacy of his personality that he infused into my grandmother and was passed onto my mother is also mine.

I wonder if a hundred years from now, someone will look at a photograph of me and wonder similar things. It goes back to a post I wrote some time ago about wishing there was a way that we could preserve who we are for future generations. Even if it was just a permanent storage medium that kep all of our personal records...photos, writing, recordings...whatever. Maybe blogging is part of that. It's our way to shape the image the future will stare back at and wonder... 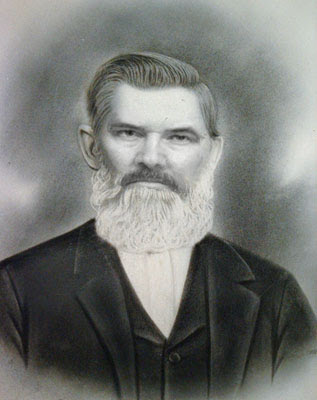 If you can see a person's eyes in the photo you can usually tell a lot about who they are. Some people can pull an invisible blind down behind those eyes so their character remains a mystery.

Blogging is the same. You can get to know some people quite well because they are open and honest while others will always remain a mystery because they don't allow people past their guard.

I am an open book on both counts. In you Tim I see kindness, wisdom, humour and a beautiful soul. Amen.

100 years time mate, they will come here and think, what a genius!
to do so much with such primitve equipment.

then they will look at all those that have dropped by here and think....

"Must have been one hell of a party!"

Tim, I have no doubt if future generations contemplete the photos you have posted for us over the past couple of years, there will be PLENTY of wondering. I just wonder what George Knox would have come up with if he had had Photoshop.

Thanks Angel w/o wings, you always say the kindest things. Blogs are like snapshots of our lives aren't they?

Steve,
Thanks mate. I'm sure they will marvel at the Whitesnake as well.

Kristy,
It usually takes about a hundred years for genius to be recognized so I have a hunch I will have achieved godlike status in the future. And even though George Knox didn't have Photoshop, something tells me he was one of the original crop circle artists.

I think that blogging offers more than a photograph ... although still a snapshot of life, it offers more than a one dimensional glimpse. Plus we have the gift of dialogue on a blog ... through art, through words, through ideas - we exchange, create and sketch! Brilliant post, JP

At first I thought, "Why did he post the man's photo twice?" On closer inspection, whilst flipping back between the two, I saw that it was YOU. You really do seem to share some DNA with the gentleman (enough to pass yourself off). This is probably a good thing because he looks kind.

I'm hoping that DNA doesn't play a huge roll when it comes to my family. I think more depends on the "nurture" aspect.

Thanks JP, I suppose blogging is more than a snapshot. It's more like a Super 8 movie. Still it can be a bit scratchy and out of focus at times :)

At first I was just going to use my image on my great great grandfather's. Then I figured most people wouldn't get the metaphor I was trying to schieve. Good eye! I always thought he looks more tired than kind, especially seeing that he had married a wife 20 years younger and had six kids. When I put my face on his, it fit pretty darn near perfect. But I thought my eyes looked harder.

I obsessed on family photos for a few years after my folks died.

Many of the baby girls through several generations of my family look identical. My sister and I look so much alike that you can only tell us apart by the date and the clothes, if the photo happened to be marked. by the time they're 5 or 6 they begin to individuate..... then, at the end of life they turn into identical apple dolls.