A funny thing happened on the way to the blog 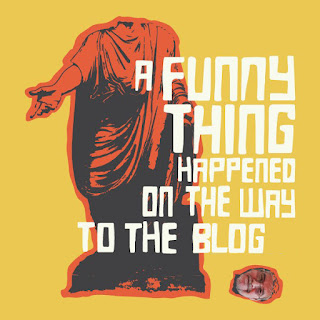 I've admitted that I have come to the realization that I'm not as funny as I thought I was. Now I think that one of the symptoms of aging (besides shrinking, having to pee a lot, and growing hair on your ears) is losing your sense of humor (in addition to losing your hearing).

Oh, I still think some things are funny, but I find myself suppressing the one liners that used to pop up uncontrollably in most situations. I used to think that meant I was witty. Now I see that it makes me annoying.

I am not sure when I developed a sense of humor in the first place. I remember humoring my father when he would tell very bad jokes, even for dad jokes. But I laughed to preserve his feelings.

I don't think I was funny in grade school. But junior high was when I started to see the humor in things. I took a creative writing course in 8th grade and wrote humorous essays. I also began mumbling funny observations in classes that could only be heard by people next to me.

This did backfire once in my 9th grade accelerated math class. The teacher was a high strung mathematical prodigy. He came over to me one day when I was cracking up the person next to me and told me to shut my big fat mouth.

This was obviously before it was considered inappropriate for teachers to scream at students in the classroom.


From then on, I confined most of my humor to my writing. As I've blogged about before, I wrote a humor column for my college newspaper. For a brief period of time I fancied myself having a loyal following of readers who thought I was funny.

Then I graduated and entered the work force.

There wasn't much opportunity in my work writing to be funny. But I tried with mixed results. I was accused once of being too clever by half by a director reviewing some of my work. When I tried to make boring slide shows (the things we produced before Powerpoint) entertainin, I was told they were not professional.

I did get asked to write funny speeches for going away parties and retirements.

Eventually, I began blogging. And again for a brief time I thought I'd found my niche. I had people who read my posts regularly and commented. That lasted maybe three years tops.

Then most of the people drifted off. And I tried to figure out why. I started promoting my blog on Twitter and Facebook. I tried the Medium and Instagram. I even advertised a bit on Facebook. There were blips of blog traffic and then "crickets."

That's when I decided that people just got tired of my sense of humor.  I was funny for awhile and then it became repetitive and annoying.

And I imagine people got tired of blog posts like this.

That's because people are funny that way.

Persisting funny seems to be all about making oneself appear successful so people can brag about knowing your work throughout the years.

I deliver dry so most of it slips under the radars of people who aren't-my-people. Most people don't listen to me anyway unless they want something or are looking for a reason to be shitty to me.

Funny you would say that...