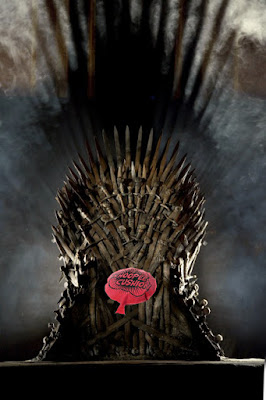 And so the Game of Thrones is over (until they make a movie).  None of my predictions about who would sit on the Iron Throne were realized.  Though Jon Snow does make Daenerys his ex-girlfriend but with a dagger instead of a "It's not you, it's me" text. And the last dragon melts the Iron Throne anyway so no one will actually sit on it.

Bran Stark ends up king of the six kingdoms (there were seven, but his sister doesn't want to play anymore so she pulls Winterfell out of the mix). Jon Snow is banished to the other side of the wall and Arya sails off into the sunset and presumably an HBO movie sequel when everyone runs out of money from the residuals.

I guess I'm okay with it all. I was late to the Game anyway. I started binge watching it after it had been out for five seasons. So it's not like I invested seven years in it like some people. There's not really a final scenario that would have pleased everyone anyway. Though Daenerys did go off the deep end rather abruptly in the end and killing her with a dagger while kissing her and professing your love to her does seem a bit harsh.

Twitter is all a buzz about the finale. There is probably more mourning going on for Daenerys than there was for Doris Day, Tim Conway and Grumpy Cat (I'm really going to miss those memes).

I really hope they don't come out with a movie or sequel. That would just unravel all of those nice loose ends they tied up to finish the thing off.

Though I wish Tyrion had become the king. I think the writers were pretty short-sighted when they passed him over.
Posted by Time at 9:38 AM