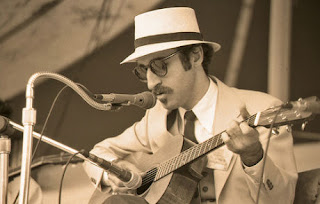 Leon Redbone died yesterday. Although he went through most of his performing life avoiding revealing who he was behind his characteristic Panama hat, suit, tie and dark glasses, (including his age), it was revealed after he died of "complications of dementia," that he was actually 69 years old. His real name was Dickran Gobalian. He was born in Cyprus, the son of an Armenian orphan.

But Leon Redbone was Leon Redbone. He appeared out of nowhere in the early 1970s and made a couple of appearances on Saturday Night Live.

As with Andy Kaufman, we loved him because he was certifiably weird. He sang old songs that most of us had never heard before (other than a few Hank Williams covers).

The really weird thing is that I swear I saw him in concert in Boise around 1975. I have this image of him sitting on the stage playing with only a spotlight on him. Some people came in late to the concert and Leon pulled a flashlight out of his suit pocket and guided the people to their seats.

But now, forty-some years later, I wonder if I didn't just see him do that on television and now imagine I saw him in concert.

I worry that I'm experiencing my own struggle with dementia.

Regardless, I am sad that Leon has “crossed the delta for that beautiful shore” as a family spokesperson put it. And I am sad that it took his death to remind how much I appreciated his quirky music. Rest in peace Leon.
Posted by Time at 8:50 AM