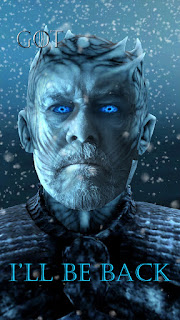 If you are a Game of Throne fan, then you know that this is the last season and everyone is trying to predict who will ultimately end up on the Iron Throne. If you aren't a GOT fan, then it "sucks to be you," (as my son likes to say).

At the beginning of the season I assumed Daenerys Targaryen and her dragons would sit on the throne. After all, she had good intentions and is a strong female role model. Then we found out that Jon Snow is actually Aegon Targaryen and the true heir to the Iron Throne. Since he is in love with Daenerys and doesn't really like being in charge, he says he doesn't care and professes his love and loyalty to his queen.

Then Arya Stark destroys the army of the dead by killing the Ice King and makes you wonder if she should be on the throne.

And of course Daenerys goes bat shit crazy in episode five and pretty much destroys King's Landing with her last remaining dragon. So you can bet that Jon Snow is thinking of making her is crazy ex girlfriend and reluctantly accepting the throne (which is pretty much toast at this point).

So who will take what's left of the Iron Throne (now literally a hot seat)?

I'm hoping Jon Snow, but it will likely be Arya.

You heard it first here at Dizgraceland.
Posted by Time at 9:54 AM