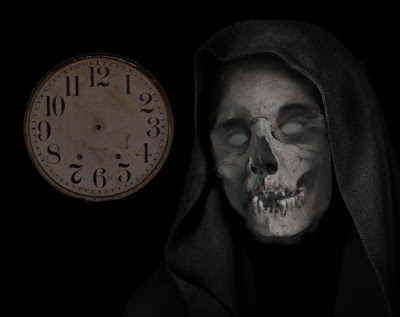 It is amazing the amount of effort (and time) we spend trying to kill or pass time. Granted, you do more of it in your inpatient youth because you can't wait for something to happen. It's not until you realize that you really don't have that much of it that you rethink the logic of trying to kill time.

In the past few months though, I've taken up doing jigsaw puzzles. I do it when I have time to fill. Because I do find myself spending a great deal of my limited time waiting for people. Doing the jigsaw puzzles exercises my brain while it occupies it. And I have to admit it is quite satisfying. But it is a bit disturbing when I finish one and the only thing to do is tear it apart and put it back in the box knowing I'll never redo it.

Ironically, time is actually infinite, just not for people. Time has always been and always will be. But humans see it as linear and limited. In addition to trying to kill or pass it, that also try to save it. Sometimes in a bottle. But in a cosmic sense it surrounds us and doesn't just move forward.

Time just is. In a way, time is very much like the way people imagine a god would be.

Time travel has always intrigued people. I don't think it is possible. Because it would have to assume that time is like a river flowing forward and all you have to do is figure out is how to go against the current. But since most philosophers and physicists believe time isn't linear, there wouldn't be anyplace to go back to. You are just in one continuous now.

So what we do when we kill time is just kill "now" trying to get to "then". But then is just another now.

But still, as flesh and blood creatures, our bodies wear out over time. So it is little wonder we view time as a finite construct that can be measured and parsed out. It isn't time that we are killing, it is us.

This gets into a broader philosophic discussion of why we exist at all. But I'll leave that for another blog post as soon as I figure it out.