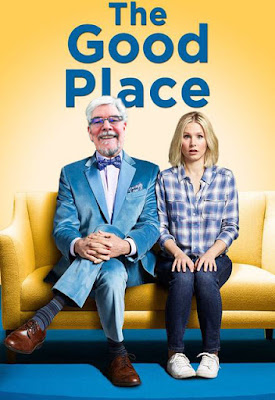 Yesterday I waxed philosophical about time and ended pondering why we exist. I thought about it a bit and then did what everyone does these days. I Googled it. And there were tons of pages out there touting answers. But they created more questions than answers.

Most of it fell in the Hallmark realm with answers like to love, to make the world a better place, to be happy, to experience and to leave a legacy. Some just say we exist by accident. Some claim we exist because of a god and point to the bible as our user's manual. But as with most things on the web, everyone spoke with a great deal of conviction but very little evidence to back up their claims.

Because no one really knows.

I've been binge watching three seasons of The Good Place. It's a sitcom starring Ted Danson who plays a demon architect who creates an experimental hell to torture damned souls. His approach is psychological instead of literal torture. The plot centers around four people who are told they are in the good place but are actually in Danson's hell.

In the show, people are judged by everything they do in life. If they don't accumulate enough positive points, they go to the bad place. Danson tells his subject that only one person on earth ever came close to figuring out what happens after death and that was a guy who had taken mushrooms and had a vision in the woods. In the third season of the show Danson visits the man who had figured out the afterlife and discovers he is living a miserable experience because his sole purpose is trying to make other creatures happy in order to accumulate enough points to get to the good place once he died.


The Good Place is a comedy but it contains so much truth about how people live their lives that it is scary. Too many people already live the Calvinistic life of suffering here and now thinking they are going to get rewarded in heaven.

Many of the people professing to know why we exist came to their conclusions after experience tragedies, depression or suicidal thoughts. So I suppose it doesn't matter if their narrative about why we exist is the right one or not. It worked for them and helped them cope.

I also noted that many people have turned their philosophies about why we exist into lucrative self-help businesses. On one hand it could be they want to share the happy buzz with others out of a sense of altruism. But part of me thinks it is just one more scam to turn a buck.

And there are so many desperate people out there trying to find meaning in their lives. I just don't think there is just one meaning. I think there are lots of meanings and you need to find your own. It may be the same as others or completely different.