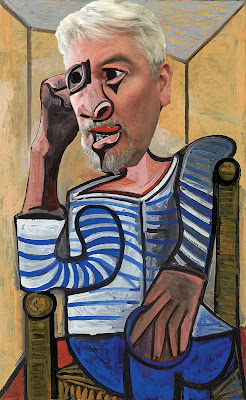 I think it is difficult to have a realistic view of what you look like to others. Because what do you have to base it on other than mirrors and photographs. And those are notorious liars.

Add to the mix the games your brain plays converting signals from your eyes and you really don't have a true image of anything let alone yourself. And let's not forget the unrealistic standards given us by Hollywood and ad agencies for what we should look like.

I have never considered myself handsome. As a boy I was, what I overheard my mother tell someone on the phone, stocky. I remember being teased by some classmates in grade school about how fast I consumed my lunch. They then started saying I had a spare tire.

The spare tire disappeared in junior high. I was pretty skinny. That lasted into college. Along the way I had your typical teenagers battle with acne. And the style for hair at the time was long and pretty much unshaped.

I never had very good muscle tone. I wasn't athletic. I hated running. To this day I have skinny arms, huge calves and the spare tire has returned in a vengeance. I also have a big nose, big ears, a few double chins and crooked teeth. Oh and I have very gray, almost white hair.

Not a pretty picture.

But then again is it what I see or what other people see? I suppose I can recall a few times in my life that people have commented positively on my looks. In first grade the mother of girl in my class told my mother that she thought I was a "yum yum boy." I wasn't sure how I felt about that. Oh and a young lady in Mexico when I was 25 told me she thought I was beautiful. But I attributed that to my blue eyes and her consumption of mucho cerveza.

And I suppose the various relationships I've had over the years found something about me attractive. The brain, however, can find reasons why someone is attracted to you even if you aren't attractive.

It comes down to self-image. And obviously, I don't have a very good one. Which probably explains why I Photoshop myself on everything. At some level it makes me feel I have some control over how I look.