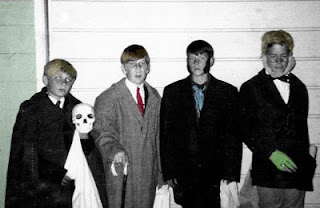 It was an eventful year.

On a more disturbing note, Vanilla Ice was born on Halloween day in 1967. And we all know how scary he was. Fortunately none of us knew who or what Vanilla Ice was. And as Halloween approached, my best friends -- Robert Tullis, Dave Little and Jim Lonnevick -- and I were more concerned about what costumes to wear than the body count in Vietnam. We had decided to go Trick or Treating as a group and I convinced them that we should all go as characters of one of our favorite television shows at the time -- Dark Shadows.

Dark Shadows was a schlocky Dan Curtis soap opera with twist that appealed to my 10-year old psyche -- it was about witches, vampires, werewolves and other supernatural creatures. My friends and I watched it every chance we could after school. I put dibs on being the main character: Barnabas Collins. He was a classy British vampire who wore a tweed overcoat with a short cape and carried a cane with a silver wolf's head. In my 10-year-old opinion, he was pretty darned cool.

Dave was going as Quentin, a character played by actor David Selby. Quentin had these porkchop sideburns and turned into a werewolf at the full moon. Jim was a bigger kid and made a natural Count Petofi. Count Petofi was an evil count whose hand had been cut off and reattached. It had special powers. Jim recreated the green hand with a rubber dish washing glove.

Robert ended up being Aristede, Count Petofi's foppish sidekick. It was the only male role of any distinction left after I snagged Barnabas, Dave took Quentin and Jim played Count Petofi. I convinced Robert to be Aristede by letting him wear a cape that belonged to my grandmother. She also helped sew together the tweed overcoat with short cape for me. I fashioned my own cane using my grandfather's walking stick and some aluminum foil shaped kind of like a wolf head. I forget what Dave made his sideburns out of, but it looked a bit like roadkill stuck to his face. Jim also recreated Count Petofi's beard with a portion of an old dust mop.

Looking back at the photo, we looked more like Mormon missionaries than the characters from Dark Shadows, but at the time we felt pretty cool. It was only after the seventh or eighth time we were asked by puzzled adults handing out candy what we were supposed be that we began to feel a bit self conscious.

I tried not to let it get to me. Because that night I was Barnabas Collins, creature of the night and sophisticated British gentleman who could drink your blood. It was only after I lost one of my fangs on a tootsie roll that I slunk home dejected to count my candy.

But looking back, that was a significant Halloween for me. I was in 5th grade and it was really the last time we could Trick or Treat and be kids. And it was the first time we were allowed to go Trick or Treating without our parents tagging along.

The next year, we were 6th graders and began feeling the pressures of leaving behind childish pursuits. I don't even remember whether I went Trick or Treating after that. So the Halloween of 1968 will always be the one I remember. Though my group of childhood friends have long since gone their separate ways (Dave sadly passed on last year), that night will live on in my memory.

And this Halloween, as I pass out candy to Harry Potter's, Pirates of the Caribbean and Ballerina's, I will think fondly of those four characters from Dark Shadows laughing and jostling each other to get their fair share of the bounty in their pillowcases before time shut the door on childhood forever.

I really enjoyed this story. The four of you look like characters out of a coming-of-age movie like "Stand By Me" or "Now And Then".
I love everything about Halloween, always have. It's not just for kids. Now it's all about scaring the crap out of the neighborhood kids to give them memories that will last a lifetime.

Ha, ha, ha, ha...Nice gnome toes! Glad you liked the story. I forgot to mention that Jim Lonnevik had the unique capability to bring up whatever he had had for lunch and rechew it. You'd be sitting there on the playground and all of sudden you'd smell a hotdog and Jim would be chewing away contentedly.

I scare the crap out of the neighborhood kids on a regular basis. I've got to get those shades on my bathroom window repaired. :)

That was a remarkable story that would even turn Mr. King green with envy. I wish I could remember such a night, but, alas, I can't. I was hooked on that show as well, but it was hell trying to get THEM to let me borrow the hour of time to watch it. Gosh, I can't believe we guys are admitting to having been addicted to a Soap Opera, of all things! The shame, the shame........

Thanks THE Michael, Man Rule #13 allows us to watch soap operas that involve vampires, witches and werewolves.

wonderful story tim, and beautifully told. what a nice memory to have!

Thank you Hayden! Hope you have a great Halloween with all treats and no tricks.

There's always at least one disgusting slob when you have a group of four boys (or men).

Hey Shandi, is that the one that goes "If you look around and can't tell who's the disgusting slob then it's you"?

Good story Tim. I hadn't thought about Dark Shadows in years. For my money Barnabas Collins is the coolest name for a vampire ever.

Shandi, Honestly, it kind of grossed me when I was 10, too.

Lights, It was kind of a cool name. I dont' think I'd name a kid Barnabas for fear he'd get the crap kicked out of him at school, but it was a cool name.

I loved "Dark Shadows" and when me and my sisters would watch it we would always yell out "dibs" on certain characters we wanted to be for that episode. I always called first dibs on Angelique. My sister had a wild crush on Barnabas...I do believe he is the Godfather of Goth.

all treats and no tricks, ehh? seems a trick would BE a treat these days, LOL!

it occurred to me that the hotdog kid was a secret ruminant- he'd be happy in a herd of goats.

The woman who played Angelique now writes novels featuring the Dark Shadows characters--isn't it lovely that the tradition lives on? I loved that show. It was my first religion.

Miss Bliss,
I had the soundtrack album from Dark Shadows. I loved this music box song called Josett's Theme. But I would have thought Barnabas was the first Metrosexual Vampire (until Anne Rice made them passe).

Hayden, I suppose some people's tricks are others treats. I never really thought of it that way.

Kristy, So you were a goth chick, eh? Should have known by all of the funky sock zombies.

I was also 10 in 1968, I dressed that year as a go-go dancer. Dark Shadows was one of a kind. In my neighborhood, it was the first "visual" presentation of the supernatural most of us had ever seen. Thanks for the memories!

You are very welcome Kat. Going as a go go dancer that year was my second choice. But I just didn't have the legs for it. :)

Hey, Tim:
My Mom was surfing the net looking for references to "Lonnevik"and found your blog.She sent me the link. Man,did it bring back memories! I laughed so hard...I never really got over my fascination with vampires. I watch Buffy and Angel reruns. But I no longer make wax fangs or put may Mom's eye shadow under my eyes to horrify myself in the mirror....I would love to see the picture of the four of us. Your friend, Jim "Count Petofi" Lonnevik.

A really fun little story, Tim Id. The kind that lots of people can connect to, sort of a Halloween version of American Grafitti (sp?).

Dark Shadows was cool. Vampire Le Stat had nothing on Barnabas Collins.
If you're into old soundtracks from scary movies and shows, maybe you can tell me this: is the soundtrack to The Omega Man available anywhere you know of? I've looked high and low all over the internet for it, and have yet to find it. But not ready to give up---it was done by Ron Grainer, and it was the most haunting, coolest horror movie music I've ever heard.

Anyway, thanks for the memories, Tim.

By the way, The Michael. I've been addicted to other soap operas, too. Twin Peaks comes to mind.