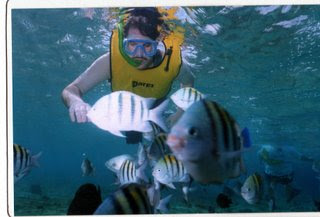 Only dead fish go with the flow.
--Anonymous

Never wrestle with a pig: You both get all dirty and the pig likes
it.
--Even more Anonymous

Wise men make proverbs, but fools repeat them.
--The most Anonymous

Anonymous is my favorite philosopher. I believe he was Greek. I think he is also responsible for the phrase, "That's Greek to me."

Regardless, I am amazed that some people can open up a fortune cookie, read the fortune and then quote it for the rest of day like Einstein had just explained relativity to them. But then again, People Magazine is one of the most widely read magazines in the country. So that says a lot about the thinking processes of much of our population.

It does make me wonder about what makes people believe in one thing over another. We have so many polarized views in the world over politics, religion and just basic reality. What makes people jump on one bandwagon and not another?

I look at lots of research as part of my job. Statistically, people are generally fixed on one side of an issue or the other. And once they are there, you can do very little to change their minds. It's the undecided people marketing and public relations people target with persuasive arguments trying to get them to jump to one side of fence or the other.

I think initially children absorb the belief systems of their parents. The weak minded ones never break free of those belief systems. I think really good teachers teach you how to think and not to accept. That's where the smarter people break free from what they are told and develop opinions of their own.

It still amazes me when someone latches onto a really stupid idea and clutches it with a death grip, even in the face of daunting evidence that it is bull shit. Perhaps that is why I like Penn and Teller's Showtime show, Bull Shit. It rattles the cage of scared cows and makes them moo. Unfortunately, as with most great things, it is like preaching to the choir because only people receptive to it watch it. The idiots that need it are too busy watching Survivor.

But then again, all of this is just my opinion.
Posted by Time at 8:16 AM

But the cool thing about that show is that they do not shill for any kind of political persuasion. So even if you watch it because you already believe most of what they have to say they will eventually get around to challenging some belief that you hold dear.

That's when it gets interesting. It's hard to say "those guys really tell it like it is" and then be confronted with them saying the exact opposite of what you had assumed about a particular issue.

So, do you challenge yourself to reexamine the issue or just tell yourself that they have to get one wrong once in awhile so you don't have to think too hard.

Regarding Anonymous, I do believe he was in the padded cell next to mine once upon a time though he struck me as being more British than anything.

“Regardless, I am amazed that some people can open up a fortune cookie, read the fortune and then quote it for the rest of day like Einstein had just explained relativity to them.”

I never understood the fascination with fortune cookies though commercials fascinate me to no end. I am a bit concerned however with the hidden message in the recent Tampax advertisement.

Lights, I totally agree. Bull Shit makes me think (the program, not actual bull shit). It has even changed my mind about some things and resolve there are no absolutes (not the vodka).

Mickey, British, Greek, it's all the same. Anonymous was a foreigner nevertheless. And watch out for those commercials, especially the Tampax ones. They'll break your heart. Trust me on this one, I work in marketing.

I once hung on just about everything John Stossel said until he began to get somewhat black and white in his formerly thought-provoking revelations. I can't believe how simplistic he can get about what he wants us to believe is the real truth about what many of us are "led" to believe. Sadly, I now have to take anything he says with a slightly larger than usual grain of salt. As polarized as my opinions and beliefs seem to be, I still live in a world of shades of gray, dissapointed by both clueless conservatives and loony liberals.

what makes me curious is that children are naturally curious, and curiosity drives thinking. Why,then, does the majority of the population grow up preferring not to think? What happened to kill the curiosity? Why do "we" (global village here) raise our children in a manner that causes them to lose the excitement? I worked with children for awhile, and rarely met a stupid one. What goes wrong?

I think that children ask "why" (as Hayden pointed out) while adults jump to quick conclusions. Maybe they're busy lives don't afford them time to reflect on the many aspects of "why". It's quicker and easier to merely assign blame. We don't need to know why anymore, we just need a quick fix for what ails us. It's about needing instant answers. They can't expend energy sorting through all the various options... take a stand on something and move on... even if it's wrong.

It is so much easier to stand on one side of the fence. It takes incredible balance and strength to ride the middle and stay open to all thoughts and opinions.

Maybe this is far too simplistic a theory, but I literally just try not to overthink the thinking process lest I get so far removed from what I believe that I lose my focus. I find that the more distracted I am with all the b.s. in the room, the easier it is to persuade me. Not that I am not flexible or open minded, but my belief system has served me well and I try to be true to myself.

Speaking of tampax commercials - that is one product you can not sway me on. I don't care if the tampon is pastel pearly in color, smooth like a 1 million year old pebble, can fix a flat tire or be used to mix a martini to perfection - I ain't switchin'the cotton pony.

Michael, Gray is a good color to recognize. Because the world is seldom just black and white (unless of course you don't have a color television).

Hayden, I believe the challenge most teachers (including my wife)face is dealing with the standardization required by misguided state and federal regulations. The no child left behind travesty and test results that determine school funding don't seem to leave much time to encourage thinking versus repeating what you are told.

Shandi, I do believe it is important to take a stand. I think the hard thing is to be open enough to listen to opposing views and change that stand if presented with new information. The trick still remains what to believe.

Miss Bliss,Being true to yourself is probably the best choice of all.

One might argue that if you're getting your insight from television... Well, you know my prejudice against the mighty False Prophet. And I guess you're right about it being difficult to change my mind.

On the other hand I'm not sure that people really care about being accurate. They only care about knowing the TRUTH; whatever the flavor of truth of the month is.

I've observed as I've gotten older that I spend far less of my time examining my surroundings. I've experienced so many of the same things that I take a lot for granted. A wall is just a wall - not a collection of bumps and cracks. A tree is just a tree not a jumble of angles and leafs. So I can see how people simply accept inaccuracies in their lives because it isn't relevant to their immediate survival. It's so much easier to sit in front of a television and accept whatever it has to say.

It seems to me that our society encourages people to not share opinions since having respect for another's viewpoint (and not necessarily agreeing with it) is considered weakness or even worse harrassment of some sort. Even blogs don't encourage conversation or debate since proper etiquette demands that the blog be a wankfest for its author.