Blogging: So easy a caveman could do it 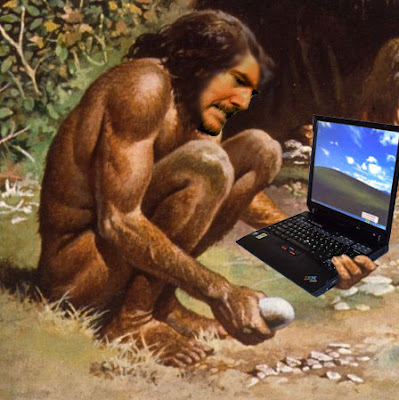 Technically, I suppose it should be that blogging is so easy that even a Neanderthal could do it since caveman is pretty much a generic term and lumps all prehistoric or early man in one big primeval ignorant stereotypical ooze. Regardless, the point is that it is so easy to blog that just about anyone does. Blogging turns writing in to one big paint-by-numbers kit for non-writers.

Okay, it's nice to have a hobby. But do we really need to cast Aunt May's paint-by-number masterpieces into cyberspace to float around in the ether when they should be in a trunk in the attic?

The problem with millions of people blogging is that we are numbing the judgement receptors that normally would allow people to tell "shit from Shinola." If Shakespeare was alive today and blogging, I imagine he would be struggling for hits and comments on Hamlet while some some illiterate S&M goat lover in the hinterlands amasses a small but significant following.

Such is blogging. It trades art for memes and nearly naked Thursdays.

But what should we expect from a country that thrives on reality television and celebrity fuck ups.

I can't tell if you're winding down or just warming up. Besides, do you really think blogging is simple? I don't find it to be so. Then again, I don't much participate in the world of memes or Nearly Naked Thursdays (much to everyone's relief...).

Kristy,
I thought about calling the post, "Will rant for Mammoth meat," but I went for the popular culture reference Geico has given us instead. I don't think writing is simple. I think the ability for anyone to create a blog and start pounding the keys and posting drivel is. Look at me!

And on behalf of the blogging world I want to thank you for not bowing to peer pressure and participating in memes or Nearly Naked Thursdays. Though it might get you the attention of that Pierce County police spokesperson you are obsessed with :)

Should I apologise now or just slink off in shame....?

Yes I am one of those bloggers that posts drivel AND participates in Meme's and Themes. As a matter of fact I have just started a blog totally dedicated to that genre.

Different strokes for different folks Tim. We all find our enjoyment in different places.

Gypsy,
This has been an ongoing rant of mine for years. Hadn't had you in mind when I wrote it. I have always enjoyed your stories about your life. And if you enjoy memes, go for it. It's your blog. Different strokes.