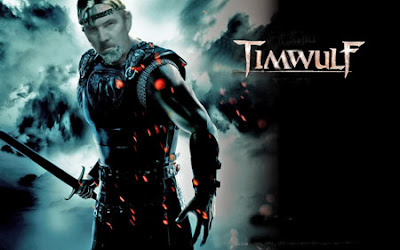 Every now and then I feel a surge of testosterone and get the urge to watch films that appeal to the warrior guy in me. Braveheart was one of those films and 300 (the film about the 300 Spartan warriors) was another. Pop those puppies in the DVD player and you immerse yourself in some good old fashion sword slashing mayhem. I say, "hoo yah."

So when I saw the film Beowulf was available on Netflix, I slapped it into my list thinking I was in for a macho treat of blood and guts in the Braveheart tradition. Okay, there was plenty of blood and guts, but Beowulf is really nothing more than a computer-generated comic book.
Bummer.
The film had some well know stars like Anthony Hopkins, Angelina Jolie and John Malkovich. You can recognize them in their CGI (or whatever technology it is) doppelgangers, but they are freakish in the same way the characters in Tom Hanks Polar Express were. They are lifelike in a not lifelike kind of way. These characters were like Shrek on steroids.
I watched this film in the same way you'd watch a train wreck. And then I watched the Making of Beowulf segment in the DVD's special features section. And I discovered the really disturbing part of the film. The actor who plays the megabuff Beowulf --Ray Winstone -- is a middle aged man with a major pot belly.
Okay, on one level this gives hope to the rest of us middle aged dudes with pot belly's who want to be buff heroes without working out. But on another level it creeps me out royal. This Beowulf spends half of the movie prancing around nude with his tally whacker hanging in the wind and having sex with Angelina Jolie. It was kind of okay when he was a mythic hero with major abs. But to find out he really is just a blob with more chins than Jabba the Hut is kind of like pulling the curtain back on the Wizard of Oz.
Okay and don't get me started on the guy who played Grendel the monster Beowulf slays. It's Krispin Glover (Marty McFly's father in Back to the Future). Grendel looks kind of like a cross between a zombie Popeye and the Hunchback of Notre Dame. Freaky as the monster is, it is still less freaky than Krispin Glover in real life. Nuff said.
Oh well, I suppose this was pretty cool technology, but I don't really get the point of having real actors doing all the work only to turn them into moving mannequins with spooky eyes. I can see computer generating monsters and mythical sets, but why real people when you have them right there creating the scenes?
Though it would be sweet to have a six pack belly, major bicepts and being able to slay a dragon without having to do a single sit up. I guess I'll just have to settle for my own Photoshopped world.
Posted by Time at 4:01 PM

It was pretty cool the way they did Gollum in Lord of the Rings but a whole movie with every character like that just doesn't sound appealing. I had reservations about watching this one and you've confirmed my assumptions. Thanks for taking one for the team.

Gollum wasn't real? I thought that was Steve Buscemi. And I wasn't trying to diss on Beowulf. I think you really should buy the DVD and watch it over and over.

(I wonder if he'll really fall for this one).

Sorry was that out loud?

Krispin Glover IS freaky. Did you ever see him on Letterman back in the day? Yikes!

Yes, I saw the Letterman episode. And River's Edge, and Dead Man with Johnny Depp. I guess that's what happens when you name a kid after one of the Rice Krispies Elves.