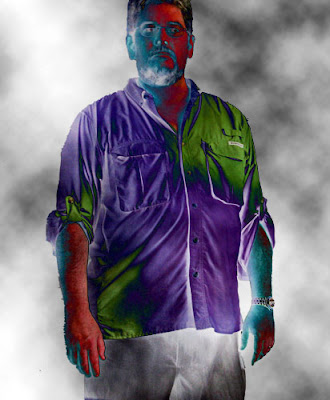 I often wonder what people think about me. I imagine more often than not, they don't. But please shoot me if anyone ever starts referring to me as a "colorful character." It's right up there with being referred to as a "delightful old codger."

I actually think I was more of a colorful character when I was a young man. I remember going to a company Christmas party dressed in black jeans, a white double breasted tux jacket, a black turtleneck with a native American choker and black boots. I also had a ponytail and an earring. Our finance director introduced me to his wife as "our resident Bohemian." I have to admit I did fancy myself as part of the artist fringe crowd. Now I would have just called myself a poser.

I've mellowed quite a bit in my old age. I don't regret losing the ponytail, though. There isn't a middle aged man in the world who looks good in a ponytail. Or an earring. Life after 4o for men is pretty much Tommy Bahama, Dockers, t-shirts and sweats. I am grateful that leisure suits peaked when I was in my 20s.

Perhaps I should design a fashion line for middle aged men. Every thing would be in black gray or dark blue. It would have to include fashionable slacks cut full and discretely expandable at the waist. Shirts would all be untucked and oversized to mask the belly. The collar would somehow lift and pull back the double chin. I'd market it as the Fountain of Youth line. It would make you look 20 years younger. I'd open up shops in malls. Maybe I'd call them Methusala's Closet or Wrinkle in Time. I'd make it hip to be old.

Sometimes I amaze myself.
Posted by Time at 9:04 PM

Tell us when your new line is in stores, I'll be sending FP to beef up his wardrobe!! JP/deb

JP,
I will change the way the world looks at old people :)