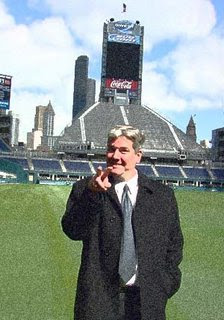 The Seattle Seahawks spanked the Philadephia Eagles last night on Monday night football, 42-0. They are now 10 and 2. They've already clinched the NFC West and will be in the playoffs. They are having the best season they have ever had and yet still we have to endure that blowhard John Madden blather on and on about how he didn't know whether the Seahawks were really any good or the Eagles just sucked.

Well Madden, you suck. You spent the last half of game pontificating about everything but the game you were supposedly providing commentary on. You even spent five minutes wondering why older fans don't take their shirts off at games. You are a disgrace to the sportscasting field. And that is pretty pitiful.

Even if the Seahawks go to the Superbowl, there are going to be jerks like Madden explaining how it is simply a fluke and go on to talk about the Chicago Bears and Green Bay. But I'm here to tell you, this is the Seahawks season.

Pity I gave up our season tickets. But at least we have the big screen TV.
Posted by Time at 7:57 AM

Being a Redskins fan I was very happy to see the Eagles getting humiliated on national television. It was also nice that the game was out of hand by the half so I didn't have to watch any more.

Soon after it was suggested that a city's football team could actually be moved to represent another city, I lost all interest in football. The INDIANAPOLIS Colts? GMAFB!

Thanks for commenting on my annual football entry guys. I figured you weren't going to weigh in on the stupid santa hats debate for fear of pissing off shandi.

And thanks the michael for naming a brave new language after me. You are one skiuvkck of a pal.