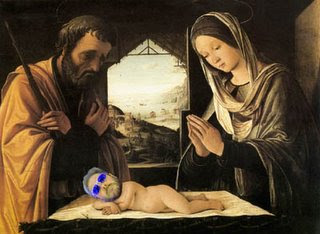 Yes, I know some of you may just look at this and say, "This is just wrong." But it is my blog and I must follow the meanderings of my imagination. And for some reason, it truly amuses me to superimpose my not so pleasing face onto various classic images.

Call me narcisstic if you will, but just don't call me late for dinner.

I'm not one to slap a lot of symbolism onto things, but if I did, this bastardization of the Nativity Scene would represent my own feelings sometimes that blogging is like laying there on a blanket with strangers staring at your pimply butt and shaking their heads in disgust.

Or it could be a statement about the true meaning of Christmas. Wouldn't that be scary.

I always loved Christmas as a child. I think it was the anticipation more than anything else. There was the excitement of decorating the tree and the imprinting of traditions. Though one of my earliest memories of a Christmas tree was this aluminum one my father picked up at the hardware warehouse he worked in. It was about 4 feet tall. My mother would only allow these red, satin wrapped balls as decorations and it was lit by one of those motorized colored wheels that rotated in front of a spotlight and turned the aluminum tree all of the primary colors. It was the height of modern Christmas trees in the early 1960s.

Eventually we switched back to real Christmas trees because they smelled good. Then there was the ritual 30 minutes of swearing from my father as he tried to get the tree to stand up straight in the tree stand while my mother stood back and giggled. Then there was the additional 45 minutes of swearing while he swapped out lights on the light strings to figure out which one had burned out.

But eventually we would decorate the tree. I remember being lectured by my mother about placing one strand of tinsel on at a time when my inclination was just to fling handfuls on the branches. Her goals was a tree that was pleasing to the eye. My goal was to get it finished so presents would start appearing.

To this day, I think I prefer the mystery of wrapped presents to the anticlimax of unwrapping them. And despite the admonishments from my parents that good things come in small packages, I still fought with my brothers over who had the largest package under the tree (authors note: when I refer to package here, I am talking about presents, not the now common and vulgar vernacular meaning of "package" as it is often used today...though I still have the largest package in that context as well).

I loved the secular rituals of Christmas, but even as a child, I knew that it was loosely associated with the birth of Jesus. And I was familiar with the Christmas story, Bethleham and the virgin birth. I didn't have a clue what a virgin was or why it was significant, but I did vaguely wonder how Joseph felt about Mary giving birth to someone else's child. I also wondered what happened to him because he seems to be conspicuously absent from stories about Jesus later in his life.

I was a Sunday school teacher's worst nightmare because I asked questions like that alot.

Which leads me oddly to the whole politically correct dilemma we as a society struggle with when we debate whether or not we are celebrating Christmas or a nebulous but less exclusive "holiday" season. I think we've watered down the "Christ" and "Mass" to a point where most people don't think of it as a christian holiday. So I don't have a problem with it being called Christmas. If we totally eliminate the word, we pretty much have tossed out most of the traditional "holiday" carols. "Blue Holiday," just doesn't do it for me.

And don't get me started about Kwanzaa.

Now, after that brief political statement, you may still be wondering why I've Photo shopped my face on the baby Jesus in a nativity scene.

Because I could and I felt like it.
Posted by Time at 7:15 AM

That was the funniest picture you've created to date. Well worth all the burning in hell you are sure to do as a punishment.

Why thank you Lights,
I am so looking forward to warmer climates.

You.....you.....BLASPHEMER! First, we have this Davinci Code Attack on our Sacred Mother Church coming out and then...THIS! Yes, Tim, you shall surely roast in hell for such an evil thing you have done here! In the name of our loving Jesus, you shall be smitten and tossed down into the fiery pits to suffer for all eternity!

Oh crap....almost lost it there......you see, I was programmed in catechism as a sleeper catholic, ready to be activated by any number of code images such as these......believe me, I've tried to get reprogrammed, but it's insidious how deeply ingrained all this Catholic guilt is. At least I didn't light a cross on fire this time......boy was THAT embarrassing.........

That's okay Brother Michael. I was ready to turn the other cheek.

I'm just waiting for some fool to correct me about "holiday trees" so I can tell them to "go fuck an elf."

Oh god that was too funny!!! It felt like I was there.

A note to all: I like the way everyone's becoming more relaxed and being themselves. It shows who we really are. It's nice that we don't have to hide or be affaid that someone might condemn us for having a different idea then the others.

Isn’t it amazing how parents can take the memory of what is supposed to be the most miraculous time of year and contort it into an experience that even a long night of combining hard liquor and chronic could not equal?

Glad you liked it. But you according to the michael, that means you will join us in the warmer climes.

I am so glad you stopped by. I thought you would appreciate the "Christ" "Mass" experience.

Love the photo Tim... yet I'm still hung up on the package comment. Where in the hell did that come from? :) You are truly in a smart-ass mood aren't ya?

Very funny post. I agree with you... the packages always looked better before you unwrapped them. The thrill of wondering what lurked beneath the gold and red paper was so much more exciting than the socks and underwear that suddenly replaced my greatest dreams on Christmas morning.

Glad you like the photo Shandi. I'm just paving my road to hell one brick at a time.

Regarding the "package" clarification, I simply want to avoid any embarrassing misunderstandings for readers. This is especially important in relation to the old adage, "good things come in small packages."

I also hated opening a brightly wrapped gift only to discover socks. It taught me never to give practical gifts if I could avoid it.