Dope on a rope 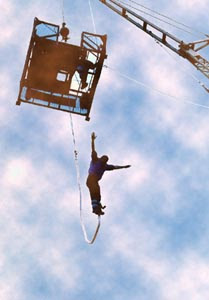 I don't think I am afraid of heights. I do, however, break into a cold sweat if I think about jumping from them. But just as I encourage other people to face their fears (like tormenting my co-worker who is afraid of clowns with pictures of clowns), I decided years ago to plunge right through my phobia and go bungee jumping.

When I was about six or seven years old, my brothers talked me into going up on the roof of the shed in our backyard and playing paratrooper. The shed was probably only about 8 or 9 feet high, but it seemed like a skyscraper when I was a kid. And jumping off it was terrifying. But my brother Dan was always tormenting me about being a baby. So I jumped. God knows where my mom was. Anyway, I didn't break anything, but it helped ingrain this fear of jumping and falling into my psyche.

I tend to hate amusement park rides that involve plunging, too.

Anyway, maybe it was temporary attack of macho that made me put aside my fears of falling and take up the challenge of a co-worker named Keith to go bungee jumping in a remote town of Washington called Goldbar. The bungee jumping company advertised the jumps in a local newspaper. For weeks it was a running joke between Keith and I about when we were going to go bungee jumping. Finally one day, he called my bluff and made reservations for a Saturday morning. All I could say was, "Bring it on," before I hightailed it to the restroom to void my bladder as the reality of what I had agreed to sunk in.

Now compounding my fear, and I'm not making this up, was an incident that took place two days before our scheduled jump. I was walking to my bus stop in downtown Seattle and noticed several people on the sidewalk were staring up in the sky. I looked up and saw what appeared to be glass falling from the sky near a skyscraper. Moments later what looked like a rag doll came tumbling after the glass. I realized to my horror that it was a body. It struck the sidewalk across the street. Fortunately, my bus arrived at that moment and I boarded in shocked silence at what I'd just seen.

I learned later from a brief article in the newspaper that the body had belonged to a young transient who had broken a window on one of the top floors of the building and jumped. That's all I ever heard of the incident. For months I'd stare up in the sky every time I walked to the bus stop and see in my mind that body tumbling from the sky.

So with that pleasant image in my mind I drove with a group of people the following Saturday to Goldbar to be hoisted by a crane in a cage, high above a pit filled with straw. Several of my friends had come along with still and video cameras to capture the event. Keith and I signed releases saying we wouldn't sue the bungee company if our legs got pulled off and then I agreed to jump first. Keith, wished me luck with a smirk as a guy wearing a dunce cap who worked for the bungee jumping operation wrapped a towel around my ankles and secured the bungee to my legs. He then helped me hop over to the crane platform.

We didn't talk much as the platform rose a daunting distance into the sky. Within seconds it stopped and the man wearing the dunce cap opened a gate and motioned me forward and mumbled,"Count to three and jump." It barely registered, but I knew if I thought about it I wouldn't do it.

I hopped over to open gate and stood at the precipice with my toes hanging over the edge. I didn't look down. Then, instead of jumping, I stepped forward like a man walking the plank and plummeted feet first through the sky. When I hit the end of the bungee, I felt like the business end of a whip being snapped sharply. Then I bounced back into the sky. I was screaming in fear and eventually joy as I bounced, and bounced and bounced. When the bouncing subsided, they lowered me gently to the ground, hanging upside down like a trophy fish.

I was euphoric as I walked to my circle of friends, tugging on my pants that had almost come off during my jump. I ignored the "why did you jump that way" comments and stood with them as my co-worker took his position on the crane platform. When the gate opened for him, he stepped forward, waved and did a perfect swan dive off the platform. I hated him at that moment.

This was about 14 years ago. Every now and then take out the video of my jump and watch myself flop off the platform like a dead fish and crack like a whip as I hit the end of the bungee. I hear my friends on the tape audio gasping and remarking that "that must have hurt" and "he didn't jump, he fell." Then I watch my co-worker's perfect jump with his arrogant wave. Finally, I put the tape away and reflect on the lesson I hope I learned from the whole experience: Pride really does come before a fall, and facing your fears doesn't mean squat if you don't look good doing it.
Posted by Time at 6:24 AM

When I am challenged to a demonstration of Manhood, I simply say, you go do this "macho" thing that makes you so manly, and when I visit you in the rehab ward afterwards where they are training you to move your little finger, I will then ask you just how manly you feel. Or maybe I won't, because maybe I'm not quite that cold. But, the point is, it's not me who's most likely to get busted up, since I was smart enough to avoid stupid risks like that with precious little return in the first place.

I wouldn't say anyone challenged me to demonstrate my manhood. If that had been the case, I wouldn't have needed a bungee cord.

I've always wanted to bungee jump, but not off of a crane in the middle of a vacant lot. I long for the old days, of illegal dawn jumps from bridges.... why the scenery matters, I have no idea.

I went bungee jumping. Do you think that was to prove my manhood? It was amazing to say the least. I lived off the rush for several weeks. I would do it again in a hearbeat. Cheating death makes you feel so alive. Maybe I'll post my series of photos as well. Thanks for the idea ;-)

Hayden, Yes it would have been a bit more romantic if I had bungee jumped off from a bridge over a river. I'm not sure about the illegal dawn aspect of it, however.

Shandi, I am not suprised. But it was THE Michael who started all of this "prove my manhood" stuff. The only way I almost proved my manhood was when my pants almost came off. And yes, you should post the photos.

I went sky diving once. This was before you had to do a tandem jump the first time. They just did a couple hours of on the ground training. You know, stuff like how to jump off the plane, what things to pull to open the parachute, and how to steer once it does (theoretically) open. If you've seen the movie Fandango it was a lot like that. (Except without the laundry).

It was pretty cool. They had a receiver in the helmet so the instructor could talk you through the landing. It was one of the rectangular parachutes so it had a limited manueverability. Jumped from 3000 feet and the tether pulled the rip cord just like it was supposed to. Once I was sure that I was not plummeting to my death I was able to enjoy the descent. The landing was not very pretty as I ended up head down in a ditch. Didn't hurt anything tho and had a blast.

Nevertheless, I have not been tempted by a desire to repeat the experience. Once was definitely enough for me.

Lights, You are braver than I am. I thought about skydiving, but the only thing I hate more than jumping is hitting the ground. At least bungee jumping saves you from that...or theoretically.

That is awesome I would be afraid of the cord breaking too. Is that an actual picture of you? You should post the video it would be awesome to see!

Thanks Cherish. Yes that is an actual photo of my bungee jump. Fortunately I was skinny then. If I tried it now I think I would have hit the ground. I would post the video, but I haven't a clue how to convert video tape to digital.