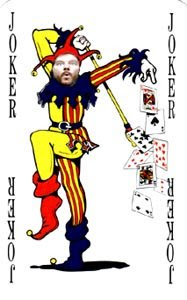 My first reaction to the Web definition of blather I found was to wonder what would be considered "practical" gibberish as opposed to "foolish" gibberish. Though from a more positive point of view, I did discover that a person who blathers is known as a blatherskite. I'm going to file that tidbit for the right moment and spring it on someone riding the train during my commute (i.e. Begone blatherskite. Annoy me no longer).
What I didn't find as a synonym for blather or blatherskite was blogger. That suprised me. Because other than the few blogs I read on a regular basis, I still can't seem to find much more than random blather when I click on the "next blog" button. I wouldn't mind it if it was practical gibberish or at the very least, entertaining gibberish. For the most part, it is simply gibberish.

This continues to disappoint me about the blog world. You would think out of 14 million blogs floating around in the ether that there would be a few more good ones than I seem to have uncovered.

But I suppose good is a relative term. I seem to have lost my perspective when it comes to what's entertaining. Which brings me to last night's episode of Deadwood on HBO. The show has always seemed to be a stickler for realism. The sets are remarkably detailed and true to the timeframe Deadwood is set in. It is the dialogue that is starting to get to me. Because other than the words, "fuck," "fucker," and "cocksucker," the characters speak in such archaic terms that I'm beginning to wonder if they shouldn't start adding subtitles to the show.

For example, in one scene, Mrs. Elsworth (a rich mine owner in Deadwood) proposes to Mr. Hearst (of the Hearst's of San Francisco) that he purchase a minority share of her mining claim in exchange for 5 percent of his holdings and access rights through her property. He responds angrily that he is not a capon. Okay, I know that a capon is a castrated rooster (don't ask me how I know that), but how many other people watching that program knew that? I'm worried that Deadwood's rich use of profanity and obscure and archaic English will soon lose 99 percent of the American population. I don't think Deadwood can survive if I am the only one watching.

But I think I am blathering. Oh just call me a blatherskite and get over it.
Posted by Time at 6:23 AM

"Begone blatherskite. Annoy me no longer." Please say that to someone and blog the reaction. That one made me grin. Hell, I just might say it to someone myself.

I've still been hitting "next blog" in hopes of finding and recruiting new talent into our little circle, but am finding less and less as time passes. It looks like more idiots are finding their way to the blogosphere. Yet, they seem to find more hightech add-ons. They have so many bells and whistles I can't seem to hit the "X" before I'm blasted with music videos and nude photos.

Shandi, You can't go wrong with alliteration. But where did you say you found the music videos and nude photos? All I seem to get are Norweigan blogs about goat cheese and boats. :)

You just dissed the very best thing about Deadwood! The problem with modern profanity is that most of its users substitute it for an adequate vocabulary. In Deadwood, it's used to ornament otherwise beautifully phrased sentences. The profanity is the star on top of the vocabulary Christmas tree.

I'm trying to be very judicous in parcelling out my Season II episodes of Deadwood. I wouldn't change a thing!

Kristi, I was not dissing the profanity. That is my favorite part. It is the archaic English that the writers apparently believe they spoke in the late 1800s in Deadwood that I believe is a bit heady for the average HBO viewer. And I am talking season III. You will note a distinct change from the first two seasons.

I read that Deadwood has been cancelled and that there will be two 2 hour movies to wrap up the series after this season.

Also, regarding the finding of quality blogs: For the sake of argument let's say that there are 30,000 fantastic blogs that you would read every day if you could just find them. Sounds like a lot, right? But if there are 14 million blogs it would take you approximately 500 clicks of the next blog button to stumble across just one of them.

A JESTER tim? But a jester is a clown! Closer to clown than a mime....!

what is this blogworld coming to!?!

Lights,
I had heard this was Deadwood's last season. And that's an interesting math problem you have posed there. Perhaps if we sat 500 monkeys playing cymbals down in front of a computer terminal, one of them would also type out an award winning blog. Hey wait...

Hayden, Surely you can tell the difference between a Joker or a Fool and a Jester.

I find it ironic that you could apply the same math to the odds of finding other inhabited worlds in the universe that you could to find a blog worth reading amongst the 14 million you site. Yea, the thing that anoys me is how many Tawainese manga stlye blogs litter the place. What's really halarious is that these blogs will have English titles yet are written in Mandarin or some other pretty script. And yes, it REALLY is annoying to be faced with a blog so full of junk (such as auto-playing audio and video) that you can't find what it is the blog is about.

The English lanquage really is getting dull these days, which is why I enjoy those movies where the charactors speak well crafted words economically rather than the simple blather we spew today. I find that the Enlish and Irish still seem to have some interesting words left that they use regularly, and the accent certainly adds to the pleasure of listening to it, or even reading it.

It's true, the blogosphere does seem to be littered with alot of "deadwood"........hehe

THE Michael, I guess that is kind of ironic. It is also ironic that the odds of finding intelligent life in the universe are greater than finding a reasonable number of interesting blogs here. Perhaps there is a reason that, up until blogging caught on, publishing was restricted to people who could pass through the gauntlet of magazine and book editors. Much of what is in the blog world today used to be restricted to private journals and bathroom walls.

And was that a dig about Deadwood (which btw is basically a program about middle managers in the wild west)?