It's no longer Wednesday, but this is still Boise 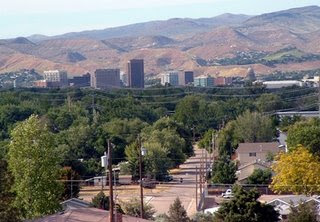 Perhaps you sensed my frustration last night when I spent more than an hour loading images and writing about my arrival in Boise only to have blogger.com hiccup and lose it all. So I did the rationale thing. I cursed blogger.com and watched television instead of attempting a rewrite.

But I won't it slide. It wasn't brilliant prose, but it seemed so at the time and now I will be overcome this feeling of deja vu as I attempt to recreate the post. Thus is my lot in life.

Regardless, I arrived in Boise on Tuesday after a relatively uneventful flight from Seattle, uneventful that is, save for a lead flight attendant who staved off boredom by engaging in a standup comedy routine that wasn't half bad. I particularily enjoyed his nontraditional banter when he chided boarding passengers with, "You aren't shopping for furniture here, just pick a seat and sit down so we can finish loading the plane and take off."

A flight from Seattle to Boise is almost over as soon as it begins. You are handed a drink. It is taken away and you land. I snagged my luggage quickly, enjoying that fact that I've never seen Boise's airport crowded. I proceeded to the rental car counter and listened to the rental clerk try to convince me to upgrade from my economy car to a Chyrsler 300 because it has a Hemi. I don't know what a Hemi is other than rednecks get wood when you talk about them. I declined. The clerk gave me the Chrysler 300 anyway for the economy car price because it was the only one ready. I didn't bother to debate his logic. It is a nice car with leather seats, a sunroof and of course, a Hemi. 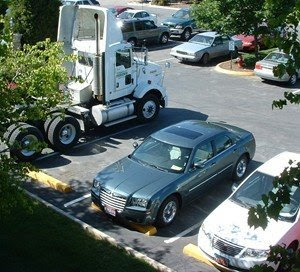 When I arrived at my mom's house, she was in the yard having just finished mowing the lawn, weeding her garden and splitting a cord of wood. She is 81-years old, but she is pretty active. I hugged my mom and then dashed for the door, trying to keep her dog Duchess from buring her nose in my crotch. When the dog isn't killing squirrels, she can get pretty amorous and I'm pretty sure she doesn't have a Hemi.

Mom's house, of course, has not changed since my last visit. I immediately whipped out my computer, sat down, and started grilling my mother about her family. This may seem callous, but this is the prime reason for this trip to Boise, spend quality time with my mom and uncover as much as possible about my family history. Plus it is important to engage my mother in a firm topic or we would soon be discussing the time her radiator hose broke in 1997.

After a few hours, I had gathered some great anecdotes about my mother's childhood. Other than the peanuts on the flight from Seattle, I hadn't eaten. I declined my mother's offer of a Banquet frozen dinner and told her I'd pick her up the next day for lunch and a quick trip to the cemetary to pay respects to some of my ancestors (that's another blog post). I then drove off in the Chrysler 300 with the Hemi to check into my 2 1/2 star hotel and then get something to eat. 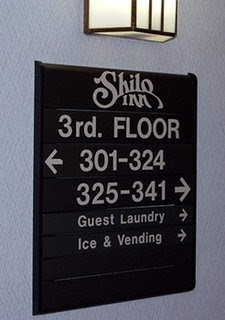 On the way, the oldies station played Neil Diamond's "Shilo." I took this as a sign, since this is where I am staying...the Shilo Inn at the Airport and right next door to a truck stop. Actually it is quite convenient since the truck stop has a Subway shop and a Taco Bell Express. At least I won't starve. Plus the truck stop does free bench checks of your CB radio. That's pretty cool.

I consider stepping into a hotel room for the first time much like ripping the wrapping paper off from a present at Christmas. This room is underwear. I would have preferred a bicycle. But that is okay. It is clean and functional. And they have a workout room that so far only I seem to use and an outdoor pool that they claim is heated. Each time I've used it, I feel as though I deserve membership in the Polar Bear Club. 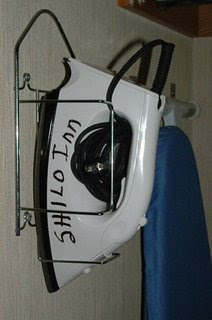 So that is the lost Boise arrival post in a nutshell. I've spent the past three days with my mother taking notes and going over old photos. Plus there was one trip to the cemetary. These will be subjects of future blogs (or not).

For now I think it is time to return to the television. I'm fascinated at how small everything looks on a 19-inch screen.
Posted by Time at 6:59 PM

You can only get 60's and 70's rock because most of the stations are owned by the same company.

The cold swimming pool should take care of any excitement caused by the Hemi.

Why did you pick the Shilo Inn? Stay at the Courtyard off Broadway by East Jr High. The prison work-release employees will take good care of you if you give em' some smokes.

It is cool to land almost as soon as you take off, but you may actually get to land BEFORE you take off on the way home thanks to the time zone change. That's uber cool--almost as cool as 70's rock when they play the original Hooked on a Feeling which will now and forever more conjure visions of David Hasselhoff for both of us. Am I right? Absolutely! Yeah, baby.

OOOOO a hemi!!!! GRINZ.... I did not think you could park a Chrysler 300 at a 2.5 star hotel, I thought it was 4 star and up only. You may be in violation of your rental agreement. I am sure your mom loves spending time with you and tell you her old stories!

Sounds like you and the Hemmmmmmi are having a good time Tim. Apart from Blogger being mean and gobbling up your post. Be sure to give mom lotsa those (((hugs)))

R, Don't blame the basement smell on the cats. And I don't even want to know what the work release employees would do for cigarettes. Say hi to your father for me.

Kristy, Perhaps rehab is in order to get over being hooked on that feeling.

Cherish, The Chrysler is parked right next to three big rigs as I type. So it and the Hemi are in good company.