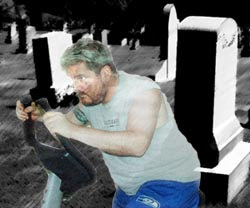 Do not go gentle into that good night,
Old age should burn and rave at close of day;
Rage, rage against the dying of the light.
--Dylan Thomas

There are certain lines of great poetry that swirl around in my head and pop up randomly. Dylan Thomas' Do Not Go Gentle Into that Good Night is one of them.

If you google the phrase, you will find many people misquote Thomas and say, "Do not go gentle into that dark night." It seems like a minor thing, but I'm sure Thomas, who crafted his poetry one line at a time at a snail's pace, would probably be pretty pissed at the misquote. Because there is a world of difference between "dark night" and "good night."

Thomas' poem was written about his dying father and is about the manner in which we ultimately face death. I was thinking about this the other day as I sat on my Nordic Track Exercise Bike peddling for 45 minutes without actually progressing. There is something terribly ironic about that. No matter how fast or long you ride an exercise bike, you never get anywhere.

I was never an overly athletic person. I spent summers in my room reading library books instead of going out for little league baseball. I hated PE because it was the one class I couldn't ace since my brain was always a bit more developed than my muscles. This didn't stop me from trying. By the time I was in junior high, I struggled to avoid being pinned on the wrestling team, sat on the bench on the basketball team and lobbed balls into the net on the tennis team. Self preservation dictated that I not go out for sports in high school (though I did get some exercise in marching band).

It wasn't until my late 20s or early 30s that gravitated towards sports again. I played softball for awhile on the company team, but retired on an early slide into third base that landed me in a cast. I received the "Rodney 'Danger-in-the-field', I don't deserve no respect award" at the team picnic. After I got out of the cast I switched to a company volleyball league. I ended up managing the league until we ran out of players and a place to play.

Finally I joined a club and did aerobics. At first it was because of a girlfriend who was into aerobics. Later, as time and gravity started catching up to me, it was for my health. I did aerobics for 18 years. Finally, after dealing with the third or fourth turn over in club membership, hectic work schedules and lagging enthusiasm to spend my lunch hour hopping up and down, I cancelled my gym membership and bought the exercise bike. Now I peddle against the inevitable.

I do not really miss the group workout environment. I never could get used to locker rooms filled with mishapen bodies with so much hair that Darwin may have rethought his theory. I do not miss the endless parade of New Years resolution club members who bought the latest workout clothes and gave aerobics a good three days before cashing it in. And I do not miss slick club sales associates who recruited new members at a pace that far outpaced the availability of locker space in a manner that would make P.T. Barnum blush.

I find comfort in my new routine of solitary peddling up and down virtual hills watching my reflection in a flickering television rather than an unforgiving aerobic's room mirror. And I take comfort knowing that with each revolution I am thumbing my nose at my frowning physician with his cholesteral charts, lectures on saturated fats and heart disease. Most of all, I take comfort that, even as that good night decends upon me, my peddling is a way to keep the light burning just a little longer.
Posted by Time at 6:12 AM

Thank Bob I have never really needed to exercise, for I could never get into it. It was such a lonely endeavor that only made me weary and sore. Of course, all the aerobics and jumping around will do nothing to stave off the reaper since I can't kick this damned nicotine addiction, so I've resigned myself to checking out somewhere around age 65 or maybe 70 if I'm lucky. I may not make it to 90, but I'm looking good till the end, thanks to genes.

THE Michael,
Well at least you inherited that from your natural parents. Pity about the cigarettes, but in the end, nothing really keeps the reaper from coming. You can just keep him waiting a bit.

I can't imagine any fate more horrifying than to be the last of one's friends left standing. It's self-centered and rude of course, but I'd rather that they mourn than that I have to. I'd rather leave the party early.

Hayden, I agree. I think Thomas was saying we should go out with a bang instead of a whimper. I want to live as long as I can be mobile and mentally on top of things(though some would say I have already bypassed that state).