God would have mercy, Timbo won't! 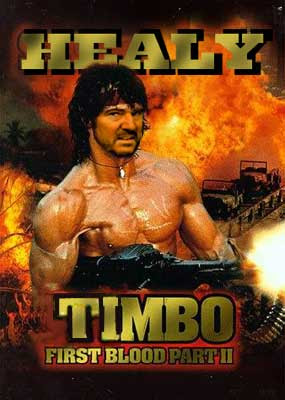 I may be having memory lapses lately, but there is one thing I don't forget -- a slight. I can be extremely stubborn that way. Some may call it petty, but I call it being persistently vindictive and a firm believer in karma.

Earl from the television show "My Name is Earl" has a list of things he has done to people. I keep a mental list of things people have done to me. I don't dwell on them, but as I said, I don't forget them.

When I was in first grade, my class went to a neighboring class to sing. I was in Mrs. Blair's class. We went to Mrs. Kimbro's class. While we were in there the kid next to kept talking. Mrs. Kimbro was old school and demanded to know who was talking out of turn. Mrs. Blair pointed to the kid next to me. Mrs. Kimbro thought she was pointing at me. She proceeded to whack me in the head. I imagine Mrs. Kimbro is dead by now, but if she isn't she'd better hope I never see her inching across a street in front of me with a walker while I'm driving.

Oh and Mr. Fahr, the principal at my grade school who poked me in the back with a pencil in the lunch room and made me pick a piece of meat loaf off the floor (that wasn't mine) and put it on my plate and then chastized me for wasting food: I hope you are living on a diet of cat food, particularly that batch that has been recalled.

There are also a whole slew of schoolyard bullies I remember who I'd like to wish an IRS audit on: John Zior, Louie Strahler, Gregg Hutton, Bill Miller and David Wilder. I hope you all have grown up to be fat and bald old men who forget what your teeny little private parts are for.

As for the person who hit my parked 1979 Honda Prelude in front of the Rainbow Tavern back in 1985 and left a note with a fake name and telephone number, I hope you busted a headlight while doing it, got busted for DUI and ended up in a drunk tank with an amorous tattooed man who told you that you have a real pretty mouth.

And finally for all of the editors over time who rejected my submissions to your magazines, I hope you now working in manufacturing plant editing instructions for shaving cream cans.

I feel better already.
Posted by Time at 9:01 PM

Tim honey, may I say how fantastically hunky you look in your latest transformation. Thank your lucky stars you are way over there out of my reach.....*fanning the hot flush from my face*

Seriously, well actually I was being serious.....you will get an ulcer holding all that angst in, not to mention wrinkles, frown lines and high blood pressure.

Let it go babe, karma takes care of everyone sooner or later.....

ooo-eeeee! remind me not to get on your hit list! Funny photo work! ..... but I find it negatively appealing.

You're preaching to the choir when it comes to me. I know this sounds arrogant but, I am one of the most compassionate (yet unforgiving) people out there. I don't hurt people and I expect the same in return. There's a difference between being kind and being a victim. I don't think that people go around continually "accidentally" hurting other people. Once or twice, maybe. Anything more is intentional. I have no mercy for repeated or excessive abuse. I merely distance myself from the person. I don't know if it's karma or not, but something bad tends to happen. I think cruelty and stupidity go hand in hand. Typically they make very bad choices in their life.

I'm not so sure God would show mercy. He killed almost every living creature (including animals) on the planet because he considered them to be evil. He also said it's okay to beat your slaves as long as they recover within a two day period. Look what he allowed to happen to Job... and he actually liked that guy.

If you're going to compare yourself to God, I think you're doing pretty damn good.

Thanks Angel, I've been working out.Don't worry, I take enough pills for hypertension, cholesteral and the stomache to take care of the angst. As for karma, even it needs an avenging angel at times.

Shandi,
I agree. Bad things happen to good people because they let it sometimes. I'm not suggesting violence, mind you, but a little standing up for one's self never hurt.

Oh, and as Bill Murray said in Ground Hog's Day, "I am a god, not necessarily the God." :)

I hope never to get on your badside Timbo :)

I remember people who have slighted me, but as you referenced in your last post, a failing memory has wiped out many of the names of early childhood nemeses. However, karma is truly an unforgiving bitch and she'll take care of whatstheirnames! JP

I absolutely LOVED this post! I have a hard time forgiving - unless it's a one-time deal and the person apologizes and acknowledges what they did wrong. I am forever trying to put curses on people who wrong me. If someone cuts me off on the highway, I wish them vicious diarrhea. If I see someone driving recklessly, I yell out "I hope you smash full-speed into a concrete column, you motherfucking piece of shit!" I even wish some of them a painful and lingering death. I know, I know... I'm harsh. (Sorry about the profanity. I hope that isn't off-limits here. I just get carried away sometimes.)

Anna,
I know people think we should be nice and forgiving and let things go, but I think it is okay to stick a pin in a mental voodoo doll at times to express our anger at stupidity.

And no, the profanity didn't bother me. You should hear me when I'm driving alone...on second thought you shouldn't hear me :)

WHAT a stud muffin!

Kristy, Complaints? I think not. But only you would you would slight a post about slights.

Steve, Ironically I post a photo of me that is unretouched and everyone assumes it has been Photoshopped.