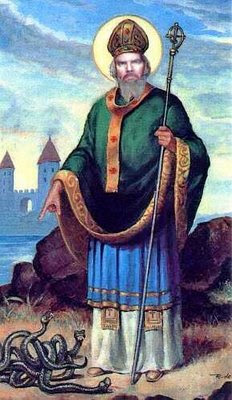 St. Patrick wasn't Irish. He was kidnapped by Irish raiders from Roman Britain when he was 16 and forced to herd sheep for six years before he escaped and returned to England. He entered the church and returned to Ireland as a missionary. He died around the year 493.

Legend states that St. Patrick drove the snakes out of Ireland and taught the holy trinity to the masses with a shamrock. There were no snakes in Ireland so the snakes he drove out were probably of the symbolic kind that represented the pagan relgions in Ireland at the time. And there is no real proof that he did anything with the shamrock. But that is the way of history. There is generally more sham than rock about it.

St. Patrick's religious feast day is March 17. It has escalated into a major American celebration of sorts that centers around frat boys painting themselves green, dressing like demented leprechans and drinking green beer until they hurl. You have to love religious holidays.

I don't really celebrate St. Patrick's Day anymore. Although my name is H****, as with St. Patrick I'm not technically Irish. My father was adopted and the name H**** he assumed originally stemmed from Hele, an old English name. Plus corned beef and cabbage gives me gas.

As with most parades in New Orleans, you spend much of your time standing in huge crowds shouting at the people on floats to throw you something. I remember clutching my green beer on Bourbon Street as the Irish Parade Princesses pelted me with green condums and heads of cabbage. Then a very large police officer marching in the parade, stopped, hugged me, kissed me on the cheek and told me I was blessed amongst men. He handed me an Irish wool tie and moved on to his next blessed victim.

I'm not Irish, but my husband is and I know he wants to go to the parade tomorrow. The weather has been kinda crappy this weekend so far (snow storm last night and this morning) so we may not end up going. I guess I'll just have to celebrate at home with a Guinness or two. I hope he'll forgive me for not being saddened by that possibility.

Here in San Francisco the St. Patrick's Day parade is today, as it should be.

tomorrow we're celebrating your birthday with an anti-war parade. appreciate.

Hayden,
I am so proud that so many people are celebrating my birthday with parades. I guess I have finally arrived and am the luckiest man in the world...world...world. :)

Thanks Whitesnake,
Would that be dance with the devil in the cold moonlight? Been there, done that. :)

Happy Birthday dear tim_id... war demonstrations are certainly in order. Attending one in Phoenix tomorrow... or at least that is the plan.

Corned beef and cabbage is not a traditional St. Patty's day meal for the Irish.
That's an Americanization.

My Mother (being the proper Irish lass she was) made spiced beef (served cold and thinly sliced), soda bread and boxty (Irish potato pancakes).

Not sure how relevant that all is, but just thought I would share.

Blazngfyre, And Slainte to you and the Angel sans wings, too!