Silence of the blogs 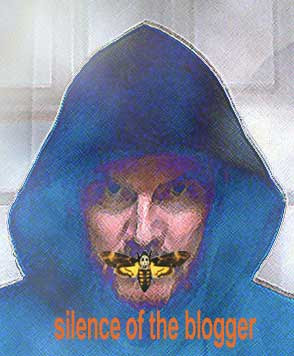 The irony of getting as many if not more comments by writing nothing has not escaped me. I do not take this personally. I am touched that anyone stops by at all (which would indicate that some of you are more touched than me).

I have waxed poetic on the art of writing about nothing before so I won't beat that dead horse (one of those idioms that is kind of repulsive if you think of it literally). I won't be beating any dead baby seals, whales or puppies either, so we can all breath a sigh of relief.

Not that I'm breathing that well lately. My sinuses are still angry after my long bout of travel exacerbated illness. I am taking antibiotics that are so huge that I am greatly relieved that they are taken orally. I also purchased a personal steam inhaler and spend a large portion of my day breathing in hot Vicks laden vapors.

But enough about my physical frailties. I started out talking about silent blogging and its advantages. I'm sure many of you surfed in and were relieved only to have to read a couple of sentences so you could get on with your day. I'm the same way. As I ritually click through my blog roll I am delighted when someone...anyone...posts something new. I am especially delighted when the post is only a few paragraphs because my attention span has grown woefully minute on the Web. If the words scroll off the screen I begin focusing on dust particles on my monitor and wondering what I'll have for lunch.

I'm not saying this is a good thing. But I work in marketing and have been conditioned to communicate tons of "messages" within very small spaces and within a very short timeframe. I have toyed at times with switching careers and working in a mall inscribing the Lord's prayer on grains of rice at one of those annoying little carts that have sprouted up in the center walk ways of every mall these days.

I am at a loss as to what people expect when they read someone else’s blog anyway. I’ve toyed with the idea of just typing “YOUR NAME HERE” at the top if the blog and simply writing blogs to order (note to self: sell personalized blog posts on eBay).

But I suppose we read other’s people’s blogs because it gets a bit tedious simply reading our own. Though I must admit, sometimes I read some of my archived material and I laugh. It’s kind of an “out of blog” experience and I occasionally forget I’m reading something I’ve written and it could be considered conceited to be amused by your own material.

Speaking of silence of the blogs, I want to voice my opinion about those of you who embed your favorite song into your blogs so they play automatically. Don’t. It is annoying. It forces me to scramble for the mute button. It wastes bandwidth. And just because you like Britney Spears, doesn’t mean the rest of the world does.

I’m glad I got that off my chest. I don’t mean to be harsh, but it is a pet peeve of mine. Not that I would normally keep a peeve as a pet. I’m not even sure what you would feed a pet peeve. And I don’t want to clean up after one either. They sound pretty messy.
But I digress.

Funny, I have the urge for some Fava beans and a fine Chianti. But regardless, there you have it my friends, 600 words about nothing.

I am always at a loss for words and I get real close to just shutting down and then something springs up. I find that as soon as I write the old "no more posts" post that I have a new post. I give up on trying to be regular... regular posting that is. Ahhh that's it... maybe my blog doesn't get enough fiber in it's diet...

If I were tech savvy enough, I would program my blog to perform David Hasslehoff's "Hooked on a Feeling" every time someone tunes in to my site. That would be awsome! I'll get working on that. Thanks for the inspiration.

I can only speak for myself that yesterday's blog was the equivalent of getting the silent treatment. But I can understand your need for peace and keyboard quiet in the wake of how many times a week you share what you're thinking.

I am still a newbie to the blog world, so I still come in every morning and check people's blogs with the same excitement and anticipation of a child opening a new box of cereal and looking for the prize. Some days there is a prize, other days I just end up with cereal dust on my sleeve.

You are a witty, funny man, T, so even when you are quiet you are still entertaining.

Kindness,
I have always found that roughage is an important part of any blog inspiration. :)

Kristy,
Combine David Hasselhoff with your sock monkeys and you will have successfully found a way to deter anyone from going to your blog.

Miss Bliss,
Share what I'm thinking? Is that what I'm doing? Huh, I never thought of that.

Hayden,
Like a fine wine (albeit one of the progressive ones with screw tops a bit loose).

Eeeks! I didn't know it was a pet peeve for some. I'll make the change. So sorry to have annoyed you (that was sincere).

Anna,
It was just a tongue in cheek statement. I keep the mute on most of the time anyway because I generally blog with my laptop while watching television. You have good taste in music anyway :)