Bars on the windows 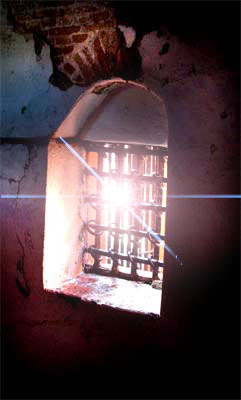 The full moon is knocking at my door again and I have felt it messing with my muse. It has also been unseasonably hot in Seattle and I do believe I am suffering an attack of the vapors.

I am having a hard time focusing on serious subjects, so out of curiosity, I browsed some of my own archives to see what I was up to a year ago. I was surprised to see that I was in Boise staying in a Shilo Inn next to the airport while visiting my mother and the graves of some ancestors. It doesn't seem like a year ago.

A year ago I was also responding to a meme regarding quirky things about myself. Most of them seem to have been OCD type behaviours. For example, I wrote I can't stand being in a house without the doors locked and the shades drawn. If I was tagged to participate in the same meme today, I would refuse and say that I have determined that I am also morbidly afraid of memes (and mimes...but that's a whole different story). Maybe completing memes is a bit too much like sitting in a house with unlocked doors and the shades up.

I compromise a bit with my blog, though. I'll let the shades up, but I'm going to put up a few bars. That way you can peer in and I can peer out and everyone is safe.

What is the fascination with memes anyway. Everybody is always poking you with a stick and asking you to step outside your comfort zone and share. Sometimes I like being in my comfort zone. It is comfortable there. That is why is is called a comfort zone. I think that unless you are sitting in a room stacked with newspapers and empty MacDonald's coffee cups, surrounded by cats that you don't clean up after, people should leave well enough alone.

While I'm sitting here with my shades up, peering out of the barred window, I will let you know that I have this thing about my garage door, too. Unless I consciously say, "The door is closed," after I've backed out of the garage, I start freaking when I'm a block away wondering if I remembered to close it. I've backed up several blocks just to check.

I don't like short sleeved dress shirts with ties, either.

I'm going back into my comfort zone now.
Posted by Time at 10:55 PM

I have been three or four miles away and turned around to make sure the garage door is closed.

I've also, after getting my pajamas on and snuggled into bed, gotten all dressed again to run outside to check on the garage door.

When I was on my way to McDonalds this morning to get a cup of coffee, I returned home to ensure that I brought the newspaper and the cat in. Turns out, I had left the garage door open. I think we should all do a meme on what we return to the house to check on. That would be fun! I just love memes :-)

K. I am pleased that OCD runs in our families. Perhaps the first baby gift I will send you is a garage door opener. :)

Shandi, Shandi, Shandi,
By your own video admission, you drink fru fru coffee drinks. You are just making fun of the monkey behind the bars. And I've got your meme right here :)

Actually, R has commented about hooking up a little sensor to the garage door. It would be linked up to two LEDs by the front door - Red means the garage door is open, Green means it's closed.

First of all Tim, that was a great pic but where was your face? Why aren't you peering through the bars?

I'm always wondering if I've turned the stove and the iron off. Sadly I usually haven't....but hey, I love to live dangerously.

I have to have light coming in. Dark rooms make me feel depressed but I'm with you on the locked doors, maybe I don't like to live dangerously after all.

yeah, BARS! Now I can rattle a stick across them and startle you. While dressed as a clown.

There is no such thing as a "short sleeve dress shirt". If it has short sleeves, it is NOT a dress shirt (regardless of what they may think in Indiana).

K., that R. If only we could harness his thoughts we could power the world.

Angel,
You are seeing the window from my point of view so you can't see me peering out. I don't really worry about leaving the stove on for some reason (and yes I do cook). And you can have shades drawn and light, too.

Hayden,
It's okay. I forgive you for trying to rattle my cage. There is a full moon. Go ahead and send in the clowns.

Iridethebus,
Tell that to an unnamed auditor who works in our building.

No garage.
No cats.
No newspaper (except on Sunday).
I make my own coffee because I'm afraid of what MCDogfoods, or StarYucks, or any other place might 'accidentally' put in it.
It could happen.
I mean, McDogfoods just sold a happy meal full of pot.

I have left (on several occasions) various appliances on and not only not known (until I got home), but when I left the house I didn't worry about what I may have possibly left on, nor did I even think about it after I'd left. Does that count? Can you say devil-may-care attitude....

Blaznfyre,
No cats? I am deeply concerned about your well being.

Miss Bliss,
It must be blissful to be oblivious. OCD's make the world go around (and they count it while it is going round).

tim, sorry, can't find your email address here. send it to me foster_hayden@hotmail.com: your questions are ready! the year takes full circle.