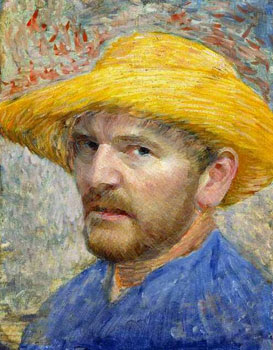 "I've just seen a face,
I can't forget the time or place"
--Lennon and McCartney

I obviously have an affinity for Van Gogh.We had this set of Child Craft books when I was growing up. One showcased the art of the masters, including Van Gogh. I was always drawn to his Starry, Starry Night. I would stare at it and just feel what Van Gogh was feeling when he painted it (or what I thought he felt). Years later when I was picking out wedding rings, I was drawn to a wedding set that was patterned after the painting.

In the early 90s I was visiting London and went to the National Gallery. I almost cried when I saw an original Van Gogh painting. It was Van Gogh's Chair and then his painting of Sunflowers. They were amazing. I had never felt such emotion in the presence of a painting before.

It was only recently through the miracle of Photoshop that I discovered a way to truly be part of Van Gogh's art. I've morphed my face into three of his self portraits. And for some reason it triggers some of the same emotions I felt when I first laid eyes on a Van Gogh painting.

I know that some probably view this as defacing a master. But I like to think that Van Gogh would be flattered that I admired his work so much that I literally wanted to become part of it. After all, Van Gogh would often taste his paints in an attempt to immerse himself in the color. And it's not like I'm copying his work the way an art student would. I'm immersing myself in it.

Let's face it, it's one thing to look at art from the outside. I like to think of this as looking at the art from the inside.
Posted by Time at 2:37 PM

Why Tim, how can you be defacing a master when your face is so much pretti...I mean handsome, than the original. The blue shirt really compliments your eyes too.

some paintings have an inexplicable pull. I love visiting art museums, but its emotionally exhausting. I can never predict which painting will bring tears on first viewing, but something always does. As for tasting paint, he had a dangerous habit, but it seems more 'normal' than being unmoved by rich colors.

It's traditional and accepted to set art students to work copying masters as a way of learning and seeing, and most feel it as an act of homage. Why should your play with them be different or less respectable?

This is a very well done photoshop job.

Angel,
Some would say the image is ear-resistible :)

Hayden, There is some conjecture that part of Van Gogh's mental problems were the result of lead poisoning from eating paint. And thank you for understanding my digital dabbling.

R. That is one of the nicest things you've said to me. Thanks!

We went to the National Gallery two years ago and it was stunning to see his originals. I understand your immersion quite well.

This weekend I went to visit my friend Sheldon in San Fransisco. He is a Psych Professor. We discussed some of these same ideas. Apparently art can be explained by the physiology of the mind especially where it comes to abstract art. Instinctually for whatever reason we are drawn to certain shapes and colors. It is all related to evolution and the survival of the fittest. They discovered that certain birds are drawn to the color yellow. They narrowed this down even more and discovered that they are strongly drawn to an oblong yellow shape with a red line running through it. Now, it's not the shape or color of their mother so you can't blame it on that. They actually have no idea why they like this particuliar shape and color, but it's universal for that species. The theory is that humans must also have this subconsicous attraction to certain shapes and colors. Abstract art is more capable of tapping into this instinct. Van Gogh may very well have been more aware of the exact shapes and colors that we are hardwired to respond to. He also may have had synethesia (i think i spelled it wrong). It's where our senses overlap. We can see sounds, taste colors, hear shapes, etc. They've tested this in individuals who have it and have clearly found that they aren't making it up. It's all in the hardwiring of the brain and overlapping or overactive synapses.

So, you liking Van Gogh means that you are more in touch with your brain chemistry... and you are clearly a genius.

Ear-resistable...lmao. On a serious note, I wish I could feel some of the same kind of emotion for paintings but they just don't move me in that way. Music on the other hand can bring me to tears, can make my heart soar with joy, can make me happy, make me sad. That is where my connection to the arts lies.

I wouldn't call it defacing at all.
Art, of any form, is open to interpretation.
I LOVE seeing well known, and celebrated works through someone else's eyes.
Whether it's a painting, a song, poetry, etc.
For me, it adds to the overall experience.

As a side note, music, sculpture and black & white photography move me most.

JP,
It is amazing to see the works in person. I wish SAM was more like the National Gallery.

Shandi, Breaking out of standard way of using our senses has always fascinated me. It's like when I wrote some time back about wishing life had a soundtrack. Somehow music and image change each other and the way you experience them. And thanks for recognizing genius. I guess it takes one to know one :)

Blaznfyre,
Thanks. There is an artist named De la Nuez who only works in mixed media that encorporates images from popular culture and the masters. I love his work.

Maybe your Psych Professor would like to do some research on people (like me) who can hear scores for full orchestras, regularly dream in music (including sleep-singing that wakes up their spouses when they try to croak out soprano choir pieces) but are completely and totally blank the instant they try to sit down and transpose what's going on in their brains.

He probably would be interested R. He showed me a video of bizarre sleepers and the things they do in the middle of the night, waking with no memory of their activities. It's pretty amazing what our minds do when we're not in control. Have you done any studies of your own on this sleep music?

Hello, hellooooooooo...can you two keep it down. I'm trying to see the music here.