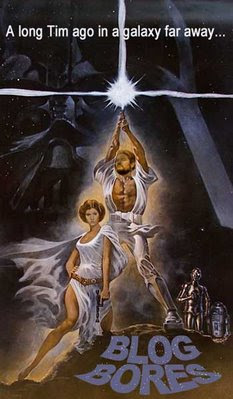 I realize that, over time, I have spent an inordinate amount of time writing about my blog insecurities, which puts me in the category of some of the blog bores I rant about on occasion. But it dawned on me that even when Luke Skywalker followed Yoda's advice to "do, or do not" Darth Vader cut off his hand and told him that he, the dark lord was his father. So even motivational platitudes can lead you astray at times.

I also don't want to retrace the "why do we blog" ground. More than enough has been written on that. We all have our own reasons. I started blogging almost three years ago because I stumbled into Blogger via Google and was intriqued by the whole, unfathomable thing.

But I must admit that it was much simpler in the beginning. As with anything new, I was giddy with the possibilities. There were no rules. So I wrote that way. And I was encouraged by the zero in the comments counter to keep on writing without rules. What difference did it make if no one was reading it anyway?

For better or worse, being read changes the way you write. It's like being able to run around your house nude and uninhibited as long as the shades are drawn. Then when one of the shades accidently goes up and you see one of your neighbors staring at you in all of your naked glory you run for your bathrobe (this is an analogy, not a confession).

Don't get me wrong. I love comments (some comments I love more than others). It is nice to have people from all over the world stop by. I just wish I could take off the robe now and then. And I'm sure some of you will say, go ahead, we can handle it. But when you get down to it, people say they want the naked truth, but in reality it looks better with clothes on.

But to overcome my occasional blogger's block, every now and then I'm going to have to let the robe fly open. Not everyone is going to appreciate it. But that's okay. I trust that everyone who reads my blog on a regular basis will understand and avert their eyes if necessary. I'd do the same for you.

Okay enough of the naked analogy or I'll have to dig out my Dirty Doughnuts masthead again. I think you get the idea. I just hope you can get the mental image out of your heads.
Posted by Time at 11:20 AM

See Tim, I told you I visit you first every day. Personally, I never blog with clothes on, I prefer the naked truth and I assume those who keep coming back for more must be ok with that.

You couldn't be boring if you set out to be and I loved all your analogies in this post, or were they confessions Tim.....come on the blinds are drawn, you can tell us.

Love the open shirt and that chest is to die for......grrrrr

go ahead, flesh it out for us.

Sometimes I worry more about the comments I leave on others' blogs than the posts I write. I also feel like I have to edit my stuff on my blog, but I try to be as open as possible. I hope you do drop the robe as often as you feel like it. I can take it, really. You may even turn me into a voyeur!

Angel w/o wings, Let's not take this blogging naked analogy too far or Steve is going to take it literally and things could get ugly.

Hayden, as I said before when you brought up clown puppets, have you no shame?

Anna, I hear you. It's hard to turn off the editor. I can't promise anything about the robe. It usually falls open by accident :)


In case ya wondering.......Cocky shit was at one time worth more than gold over here once.....

Unfortunately, I have too many family members who read my blog, so I find myself censoring what I write.
If I didn't, i'd end up hurting them too much.

However, I prefer to be naked when I'm at home. After the kids are in bed of course, don't wanna add MORE to their therapy.
Does that help?

Steve,
So Cocky shit is worth a lot in Australia? Hmmm...maybe I could send you a case of Shinola and you could sell it for me, too. :)

Blaznfyre,
The way to avoid offending anyone you know who reads your blog is to not write about sex, politics, religion, sports, work or anything about running around your house naked (even if your children are asleep).

If ya gonna send something...send you and Tess.....

I could do with the company!

It's a good metaphor (but yes, let's not carry too far & please NO more dirty doughnuts!) I've not been blogging as long as you, but I did shift as my audience grew. But it's better being part of a community, even if it means our nakedness is sometimes lightly clothed.

yes tim! i love this analogy and the fact that your robe may fall open "by accident." i love to "design by accident" so this analogy, this approach, inspires me!

JP, I am deeply hurt that you have dissed my dirty doughnuts :(

Kindness,
I subscribe to the theory that on the seventh day the Lord said, "Oops...that can't be right..." :)