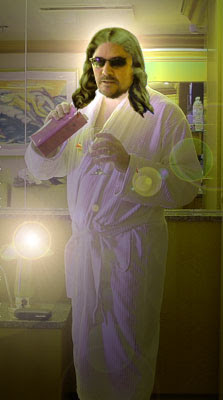 Though if I didn't get the Jesus part I could probably manage the Judas role. But I suppose I would settle for playing Caiaphas. Or maybe Pilate or Herod. When it comes down to it, I can sing all of the parts. Well, I know the words to all of the parts.

I am not ashamed to admit that Jesus Christ Superstar is one of my favorite musicals. I know that takes alot of guts these days. It was created in the early 70s and no one wants to admit to liking anything created in the 70s, especially by Andrew Lloyd Webber. But it was one of the first albums I purchased (after I'd purchased all of the Beatles catalogue). It was a double album and those puppies aren't (and weren't) cheap.

I listened to that album over and over. A lot of people at the time thought it was sacreligious. I actually thought the musical did a pretty fair job of presenting a rock version of Jesus' story. But I really didn't like the album for the story line. I loved the music.

I would sit in front of our stereo and listen to it over and over. Thinking back on it, my parents were pretty patient people. I even taped the album onto cassette tapes (when dubbing consisted of putting a microphone in front of the stereo speaker) and listened to it when I was taking a shower (which was quite often as a teenager).

Repetition burned the songs into my head. Years later when I actually saw a live performance of the rock opera, I had to fight not to be one of those annoying people you sit next to who sing along with the actors. Well, maybe I did it a little bit until the elbows in the rib caught my attention.

My version of of Jesus Christ Superstar was vinyl. I still have it, but I haven't listened to it in years. I don't even have a turntable anymore. But for some reason over the weekend the music popped into my head and I decided to go buy the album on iTunes. After nearly an hour and half (I never learn to say no to Apples continuous updates to the iTunes software) I had downloaded the 23 songs from the original studio recording and transferred them to my iPod.

So this morning, 36 years after I listened to Jesus Christ Superstar for the first time, I listened to it again with pure digital pleasure on the train going to work. And Jesus Christ it is still great! I was reminded how much I wanted to be Jesus in that musical.

The cool thing is now I can grow a beard. But unless someone kicks me in the privates, I'm not sure I could hit those high notes anymore. Christ you know it ain't easy living your dream.

It makes me cross.

I always wanted to play Temple Guard #2. He was played in the movie by Zvi Lehat. I could do a way better job that that guy. He sucked.

You're not going to Hell Tim, you're coming to Heaven with me. I wanted to be Maria in the Sound of Music. So if your Jesus and I'm a nun, where else would we be but Heaven.

Angel w/o wings,
I'm sure somewhere there is a joke that begins, "Jesus and a nun walk into a bar..." :)

What's the difference between Jesus and a picture of Him?

You only need one nail for the picture.

Some people tell me I have fatted calves. would that work?

Blaznfyre,
At least I'll be in good company burning for eternity :)

Lights, I'm thinking you might want to consider the Herod role then.

So you were listening to your Jesus Christ musical about the same time I was originally reading my Charles book. Is nostalgia contagious, or what?

I've never seen it and I don't think I know any of the songs. You should record a few and post an audio file.

there was a cluster of really fun, contemporary musicals in that era - I liked the music for Godspell, and then of course - there was Hair. Didn't get any better than Hair.

Kristy, It gives me chills.

Anna, more and more I forget there are young people in the world.

Hayden, you lived my dream. But I'll take JC Superstar over Hair anytime. Though I did love Cowskills version of the title song.

well, if it helps tim: it WAS a god-awful performance. A lot more enthusiasm than discipline in the cast/directer. Self included. or maybe it was just the pot. (not to be confused with plot)