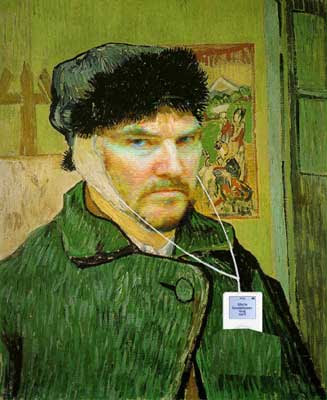 I'd like to think that I listen. I want to believe that I can be quiet long enough to hear a person through on something without hopping around like a little kid who has to go to the bathroom just waiting to interject my opinion.
Sometimes all I want to do is listen. Meetings for example. I prefer to sit there soaking in everything that is being said, letting my brain take a mini-vacation. But inevitably, someone will ask me what I think. Nine times out of ten an honest answer to that question would be, "I think I'd like to be anywhere but in this meeting." But the nature of meetings is that people don't think you are making an effort to be engaged unless you are participating. So I am forced to say something on topic and rely on the fact that most of the people at the table aren't listening anyway.
So maybe not a good example of the advantages of listening. Let's see, I like to listen to stand up comedians. But that is more of a matter of survival. Talking instead listening to a comedian is usually met with swift retrobution like being pointed out and having the comedian say, "I was going to do my impression of an asshole, but this man beat me to it." Okay so this only happened to me once.
I'm beginning to think maybe I'm not as much of a listener as I would like to be. Part of the problem is that I don't have much patience for jibberastic people (someone who speaks in tongues and or in such a way that can not be comprehended). So when I hear something that is so obviously uttered by a jibbering blue-assed baboon I find it difficult just to sit there and nod in agreement. Because if you agree with a jibbering blue-assed baboon, doesn't that make you a jibbering blue-assed baboon as well?

That was a rhetorical question.
Okay, now I wish I was a better listener. I wish I could be patient and nod in all of the right places and give those sympathetic looks that encourage people to continue. I wish I wasn't thinking about whether or not I locked the front door or the price of gas or how many more years I have until retirement when people are pouring out their guts to me. I wish I could ask someone for directions and actually remember them the minute they are done. I wish I could watch television, type on my blog, and talk on the phone at the same time.
Most of all I just wish those voices in my head would stop.
Posted by Time at 12:07 PM

I am sorry... I know I just read this entire post but I got carried away with thinking about that needle scene in Pulp Fiction! You remember that one? Whoa and ... well ... um ... jibber jabba jab on...

sometimes when I'm attempting to have a conversation with someone who is only waiting to talk I start slipping in very strange jibba jabba - you could read a dictionary to some folks and they wouldn't notice, they're just waiting until you take a breathe so they can change the subject. Again. Following them into the new subject doesn't work. They just keep moving on.

I'm pretty good at faking interest. I figure that even if the conversation is one-sided, I must be learning something. Mostly I'm just learning that the person is crazy.

My problem is not waiting to interject but being able to keep my attention span going long enough to hear the conversation out. Many times I have zoned out and I get that glazed look in my eyes. Whether the other party notices or not depends on how enthralled they are with their own jibba jabba.

When I get introduced to someone for the first time I have usually forgotten their name before they even have a chance to tell me...HUH???? Jibba jabba jibba jabba, I just love saying that.

I'ts all about pressure, and pressure is for tires.

Do I really want to be apart of this conversation.
I tend to think about my answers just lately........

As you said your mind wanders. I tend to listen and take in what is relevant and cast aside the crap.

Talk I can! But never about what the conversation was about.....

Kind of makes for interesting listening from the other party.

Hey, listen up, this was a great post! Jibberastic people ... I love this! I've always wanted a name for those people and now you've given me the perfect one :) ~JP

Hayden,
Ah yes, the people who have the motto, "Where ever the jibba jabba takes me."

Shandi, being able to fake sincerity in a conversation is an artform. Maybe you should become a salesperson like Hayden.

Angel w/o wings, I've never been good at remembering names either. I am particularly bad at listening at receptions or parties where I am supposed to be smoozing as part of my job. My escape line is generally, "Oops, I need another glass of wine."

Steve,
I am not really suprised that you don't restrict yourself to the topic at hand in a conversation.

JP,
Thanks for listening!

Luckily, I've narrowed the number of people I actually talk to down to the ones who's conversations I don't find boring or self-interested. Not so easy to do for some, I know, but I'm the queen of self-indulgence.

Kat, I'm a bit of a selective listener myself. I generally only hear what I want to hear :)

I'm a listener surrounded by a bunch of people just waiting to talk.
My husband is REALLY bad at NOT listening, but i've gotten real good at faking interest, so it kinda works for us.

Blaznfyre,
I believe for every listener there is a talker waiting to be heard. I'm not sure what that means, but I like the way it sounds. :)