Are you trying to tell me something? 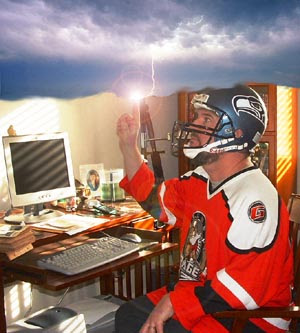 The Saturday before that day we shall not speak of, I woke up at 4:30 a.m. to a wind storm of historic proportions. As I looked at the clock I saw a bright flash and the power went off. The wind continued and a couple of more flashes occurred (I assumed the flashes were transformers blowing out). The power did not come back on.

As I fired up the battery powered emergency radio with it's 5-inch black and white screen, the irony that, despite the abundance of larger screen televisions in my household, it could be the only means I would have to view an event of major importance on Sunday afternoon in Seattle. From a spiritual standpoint, this seemed highly unfair.

It also struck me how much we have come to depend upon electricity and electronics in our day to day activities. Not only did we lose lights, and... gasp...HD TV, we also lost our ability to access the Internet. That ment no blogging. I sat staring at the 5-inch black and white screen and its flickering images of what I guessed was a Japanese cartoon, I felt helpless.

I'm not a religious person. But it did seem that some higher power was taking unfair advantage of nature's harsher elements to deprive me of my right to watch that major Sunday event that I will not speak of on the bigscreen in full color while eating a nice bowl of hot chili.

Rather than dwell on it, Tess and I hopped in my truck (after having to manually open the garage door) and went in search of a restaurant to have breakfast in. As I waited in lines of traffic at dead traffic lights also affected by the lack of electricity, I reflected once again on how much we depend on electricity.

We found a restaurant that still had power, had a decent breakfast and headed home. I watched Tess morosely click light switches on and off in vain as we walked from one dark room to the next. Finally we just took a shower, grateful that we have a gas water heater. As I stood in the bathroom towelling off, I looked up and saw a faint flicker of light on my electric Sonicare toothbrush. Praise be to the PUD, I thought as I reached for the light switch and flipped it. The room was bathed in divine light and I fell to my knees.

I was also once again able to access the Internet and post my blog in which I had innocently rewritten the ten commandments. I didn't think this was wrong. In my own arrogant way, while taking a great deal of literary license I felt I had actually improved on the originals.

I slept fitfully the night before that major Sunday event of which I will not speak. I prepared for the event and donned my lucky skull and crossbones boxer shorts and put on my lucky Grumpy hockey shirt I'd bought in Disneyland. I prepared the lucky chili in my lucky crockpot and sat down in my lucky recliner wearing my lucky football helmet bearing the logo of that team of which I cannot speak. I then picked up my lucky remote control and turned on my lucky 50-inch television.

For the next four and a half hours, I wished that the power had never been restored and that I was sitting there in the darkness rather than watching that event of which I will not speak. For a brief moment, I wondered if I hadn't brought all of the recent disasters upon me because of my unrepentent and irreverant blogging ways. And if that is the case, I have some questions for the supreme being:

Can't you take a joke? And if you can't, then why not just leave a nasty comment like everyone else? Who do you think you are, God?

Wait, is that lightening I see?
Posted by Time at 5:55 PM

It's called WEATHER, dude. Weather spares no team, fan, television watcher, showerer, or blogger. And Bob had nothing to do with it.....well, maybe in a sort of round about way, but it wasn't personal, I assure you. There are so many weather events that could have opened a much bigger can of whoop-ass on you, so consider yourself lucky. And yes, we have ALL become addicted to our electrical equipment, and I'm sure the books on your shelves were doing their very best not to look smug. What we probably should all be doing is getting together an emergency prehistoric entertainment kit, comprised of candles or flashlights, board games, good books saved for such an "emergency", and other such sundries which do not require plug in the wall electricity. Short of Nuclear war, it will all come back to you soon enough, but why not have some good old fashioned fun in the meantime? And yes, it was not the Seahawks fault, there's no team that can win with THAT kind of so-called officiating!

Thanks, the michael. But what's a book?