A nose for romance 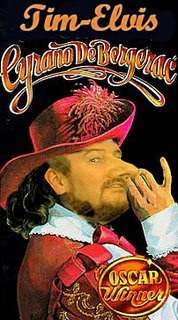 I know I come across as a slightly acidic and cynical curmudeon, but deep down I, Tim-Elvis have a romantic soul. For one, I have always had this soft spot in my heart for the play, Cyrano de Bergerac, the tragic comedy by Edmond Rostand.

You know Cyrano de Bergerac...expert swordsman and accomplished poet during the time of Louis XIV (please tell me you have heard of him, because I really don't have the time or energy to start another blog). If it helps, Steve Martin did a modern version of it in 1987 called Roxanne. Daryl Hannah played Roxanne.

The plot is classic. Cyrano is in love with his beautiful cousin Roxanne but is afraid to tell her because, although he his a soldier, poet and nobleman, his tragic flaw is that he has a rather large nose. When he finally gets the nerve to tell her, she heads off his confession by telling him of her own infatuation for a handsome young soldier named Christian. She begs for Cyrano to find out if Christian likes her. So Cyrano nobly approaches Christian and confirms the fact, but discovers that Christian may be eye candy, but he is as sharp as a river rock when it comes to romancing a woman. Cyrano volunteers to feed Christian poetic lines to say to Roxanne. Roxanne falls head over heels in love with Christian because of Cyrano's words. They marry, but Christian is killed soon after in battle. Years later, Roxanne discovers that it was actually Cyrano that wrote the words she fell in love with. But it is too late. Cryano is dying of a head wound inflicted by a load of wood being dropped on his head from a scaffolding.

Sounds like an episode of Desperate Housewives, doesn't it?

Anyway, when I was 15-years old, my high school band was entertaining at half time of a then Los Angeles Ram's football game and we were spending a week in southern California. Going to a play at the Los Angeles music center was part of the cultural experience that helped justify the trip. That play was, you guessed it, Cyrano de Bergerac starring Richard Chamberlain as Cyrano. Joan Van Ark played Roxanne. I was enthralled by the performance. Most of my bandmates, however (and the chaperones), were asleep by the second act.

Why was I so impressed by Cyrano de Bergerac? Because my geeky 15-year-old- going-through puberty self related to feeling like a hero on the inside and thinking I was ugly on the outside. Cyrano gave me hope that someday, I'd find a Roxanne that would fall in love with my beautiful soul in spite of my not so beautiful body.

I spent most of my early junior high and high school years having crushes on girls from afar. My lack of athletic prowess and shy nature didn't help. I did discover that, since I was a pretty good student, I could at least get girls to talk to me if I offered to write essays or do math homework. I didn't go to any school dances, but I did get to talk to some of the most popular girls in school on the phone quite regularly (to talk through homework assignments).

On time in particular stands out in my mind to this day. I was a sophmore in high school. For a couple of years I'd had a crush on Traci M. I'd known her since junior high. She'd been a cheerleader, gymnast, honor society and class president. She came from a well to do family on the right side of the tracks. In my mind, Traci was Roxanne and Tim-Cyrano wrote a heck of alot of papers for her. But I also kept a firm grip on the reality that girls like Traci didn't date skinny band geeks, good grades or not.

One night Traci called me to talk about a humanities assignment. I thought nothing of it. In between discussions of some Nathanial Hawthorne short story we chatted about the upcoming Christmas Dance. She asked me who I was taking. I told her I had asked a girl, but her parents wouldn't let her date until she was 16. Traci then said the unthinkable to me. She said, "You could take me to the dance." And what was my response? I laughed.

It didn't occur to me that should might have been serious. After I stopped laughing, she said something to the effect of, "Well I guess that is a no." We then got back to our discussion of Nathanial Hawthorne.

When I got off the phone, the magnitude of what had happened hit me. Traci, one of the most popular girls in our school had in essence said I could take her to a prom and I'd laughed in her face. I rationalized (and I do to this day) that she probably was kidding. But a door had opened and I had stood there at the threshold of shrugging off my geekness. And I'd laughed. The door closed and I went to practise my bass clarinet.

I'm sure incident is only significant in my memory. I doubt Traci would remember me today if we ran in to each other. What is more important is that I learned something about myself in that moment (beyond that I can be an idiot). I learned how powerful and disabilitating our own self-image can be. Just maybe, after spending time with me talking about homework, Traci saw something inside of me. Unfortunately I only saw that reflection in the mirror.

Fortunately, as I've grown older, experience (and less time staring in the mirror) have helped me be unite Cyrano with the poet within. And even more fortunately my true Roxanne came along and fell in love with my words and my nose.
Posted by Time at 6:55 AM

You never know what the motive may have been. I went to a dance in high school with a girl that I considered out of my league. I was surprised that she went with me, of course, but I soon discovered that she just wanted someone to make her former boyfriend jealous. It worked too, she ended up leaving the dance with him. You never know what would have happened.

Ouch Lights. That is harsh that she left the dance with another guy. A sign of bad character though. Well, at least you had the guts to ask her to the dance.

When the dance thing came up with Traci I had never been on a date anyway so chances are it would have been a disaster.

This one really hit home. I ended up taking my EX-girlfriend to the prom, purely out of obligation, and my new girlfriend actually sewed a shirt for me to wear. If that wasn't true love I don't know what was! Needless to say, I was miserable the whole night, being there with the wrong person. Which is probably what ex-girlfriend wanted all along. Oh, and yes, it amazed me at the time that I had any girlfriends at all, such was the state of my esteem.

Well I'll be darned if the michael isn't a romantic at heart, too!

I think most of us have been on both sides of that fence. There have been times when I was not so nice to someone geekier than myself. Most often I was the one considered geeky. I may not have had coke bottle glasses or braces (back then). However, I was afraid of my own shadow and never gave anyone the opportunity to get to know me. I was the intelligent straight A art freak. I had a couple of incidences when a more popular guy liked me. I did what you did; laughed my way back into obscurity.
I'm sure there were some skinny geeky girls who fancied you from afar, not having the courage to approach you.
I think when it comes to popularity, it works like the bell curve, with most of us falling somewhere in the middle. We all can't be the most popular. It's all about judging people. You can judge someone to be unapproachable and snobby simply because they are attractive.

That's very true Shandi. Cliche as it sounds though, I think it comes down to how a person perceives themselves at various times of their lives. Sometimes we are just our own worst enemy.

You truely are a wonderful Writer/Poet Tim. And from I know and have seen of You. I like You both inside and out. Thanks for Your insight and helping me to stop and think of my own self worth. Happy Valentine's Day.
Hugs,
~gina~

Well thank you Gina! Good to see you back. Happy Valentines Day to you, too.