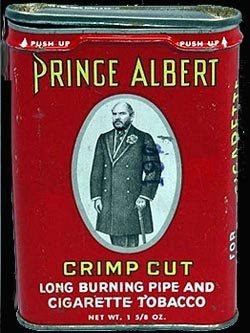 "Do you have Prince Albert in a can?"
"Yes we do."
"You'd better let him out before he suffocates."

I doubt if many people remember Prince Albert in a can tabacco. I always thought it was Queen Victoria's husband on the front of the can. Apparently it isn't. Regardless, it made for a great telephone practical joke.

I think technology has eliminated most practical jokes involving the telephone. As much as I love caller ID, it has cut down on those random dialing of telephone number pranks I used to so love as a kid. I mean, when was the last time you called someone up and asked them if their refrigerator was running? If you use that joke now most people would just *69 and call you back screaming, "Yes, it's is running and I caught it."

"Hey honey, have you seen that paper bag with the dog crap in it? I was going to go over to the neighbor's house, set it on his front porch, light it on fire, ring the doorbell and run."

"I think it's in the cabinet under the sink next to the scouring pads."

Practical jokes aren't really practical at all. They are actually downright inconvenient. The really good ones can take quite some time to carry out. Even a "kick me" sign or thumbtack on the chair require some discrete maneuvering to implement. And balancing a bucket of water on a partially open door requires patience and a delicate touch.

I also wonder what the distinction between a practical joke and a prank are. Why is a joke practical and a prank childish? Wouldn't the Prankster have been a good enemy for Batman along with the Joker and the Riddler? And why are they called joy buzzers and whoopee cushions when they don't make you happy?

That's funny, I think I'm thinking about things too much again.
Posted by Time at 12:23 PM

Lights, Let me guess, you stopped being invited to parties. Just a hunch.

You know what i find curious.. all those OLD practical jokes that lights mentioned had disappeared up here ........... then the other day i was in the Dollar store and lo and behold there they all were .. all of them.. and selling for a buck a piece.. i made a mental note to be ever vigilant at school.. cause you know .. you JUST know.. they are gonna start showing up there.....

Would you steal the sparkle from a young child's eyes the first time they sit on a whoopee cushion? I think not.