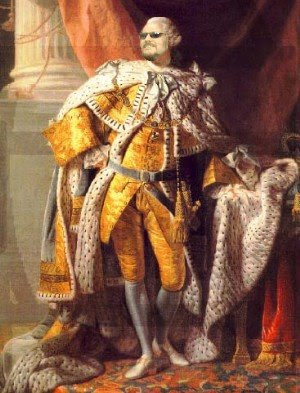 This image is left over from my "I want to be King" days. I never did send away for my royal title. It would have been fun, though, to have been King and then go to my 30-year high school reunion in Boise in a carriage dressed liked King George of England. I think I could have carried it off. And it would have been worth it to see the looks on my former classmate's faces as I stepped out of the carriage, scepter in hand with a look of bored superiority on my face (much in the way I step off the train each day after my morning commute).

I can hear the gasps and mutters of "who the hell is that," now. Of course, someone would whisper, "I think he must have been in the marching band...what the hey, hold my beer while I get my picture taken with him."

Oh well, back to reality. I'm not a King and I'm not going to my 30-year high school reunion. I am going to Boise next week to see my 81-year old mom. I don't think I'll dress like King George. Although she would likely take it in stride, I think it would cause her some distress. Because, although middle-aged, I am still her baby boy. I find it odd after living in Seattle for about 24 years to return to my birthplace. I realize Boise has changed a great deal in those 24-years, but I can't help but sense the time warp aspect of the place in my memory. I won't be staying at the house I grew up in although my mom has plenty of room. I refuse to sleep in the basement in my old room with the leopard-patterned paneling listening to the water pump run every 15 minutes. And after living with 250 premium channels on a HD bigscreen television, I can't bring myself to watch local Boise channels on a 19-inch television in my mom's family room while she sleeps in an easy chair. I also can't bring myself to shower in a bathroom the size of a telephone booth (I can't believe it was once shared by 5 people in one house). But the real reason I won't stay at my mother's house is that there really is no more room there because it is already too full of memories.

You can never really go back. But you can hover above it all, observing where you were. I'll wander from room to room staring at timelines of family photos on the walls, listening to my mom lecturing her dog about chasing the neighborhood squirrels. I'll drive around the town on autopilot remembering the pizza parlour that is now a tattoo parlour. And I'll drive by my grade school remembering those walks home, stopping to catch waterskippers in a drainage ditch in a distant time before kid's pictures ended up on the side's of milk cartoons. I may walk around the downtown or the mall, looking into faces, wondering if I'll see anyone I recognize. But they will all be new faces.

Then I'll return to my generic hotel room that could be anyplace in the country and wonder why I am a stranger in a place where I first drew a breath. And I'll try not to think about the time when my mother rejoins my father and the family home is merely a photograph replaced by multiplexes and townhouses.

And I'll realize that it is all inevitable and it wouldn't have mattered if I'd been crowned King instead of ending up a middle-aged bureaucrat commuting by train rather than a royal carriage. Because even kings have no control over time.
Posted by Time at 6:35 AM

This was very very well written Tim. You captured that feeling so well... reflective with a touch of sadness. I feel the same way when I go home. There are always a few changes to the landscape that make me feel uncomfortable... and old. I rarely see familiar faces. When I do run into someone, I spent several minutes trying to look past the years and see the person I knew. They're probably doing the same thing with me.

I go home in August.

Thanks Shandi, I hadn't realized until I started writing that I was feeling melancholy about going to Boise. It surfaces lots of memories and reminds me of how much has changed. Even good change can sometimes be hard. I appreciate you understanding that feeling.

if you were king there'd be no time to blog. annoying commoners wanting things, places to go, people to do. but the carriage sounds like a civilized commute.

Hayden, If I were King, I could have someone else blog for me. But welcome back. I missed your comments.

It would be pointless for me to venture back to where I was raised with such bad memories. There's nothing there in that Bobforsaken place to be wistful about. I compare it to escaping from alcatraz, and I doubt one would want to voluntarily go back down THAT memory lane. I even am hesitant to return to where I DO consider home for fear the impact that progress has made on it would really screw with what I remember. Sometimes it's best to let sleeping dogs lie.

I always drive around the neighborhood where I grew up when I am in that part of town. I just can not help it. I have to drive by my old house even though it does not hold wonderful memories for me. I drive slowly and look around as if to watch a movie. I can imagine playing with my friends, hearing the splashes of the pool and yelling kids that played outside all day long. It does however make me very sad to see how much everything has changed.

Cherish,I am in Boise now and it is a weird combination of the famliar and the strange. It should be good blod material.

The pump was disabled when Grandma went on city water but the basement still smells funky from the years of cat piss.