Is it unbecoming to be becoming? 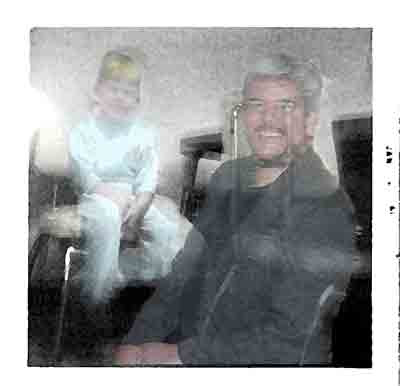 Hayden wrote another one of her great, "damn now I have to think" posts called "Becoming." The post was about finding yourself versus becoming yourself (my interpretation). She did not intend it as a Meme, but she did ask all of us, "What are you becoming?"

This question makes more sense if you are middle aged and comfortable in the fact that you don't know anything than it would if you are in your 30s and a little pissed that things aren't working out the way you planned them when you were in your 20s and knew everything.

First, I have learned many things as I fade into middle age. One is that John Lennon was right when he said, "Life is what happens while you are making other plans." I have spent a lot of energy in my life wondering what my special purpose is (not the same special purpose that Steve Martin discovered in the movie "The Jerk"...I discovered that a long time ago). I'm pretty sure that the meaning of life is living it.

I know that aging does not guarantee you are becoming wiser. Some people just get old. Some try and stave it off by trying to act young and spouting cliche shit about "you are as old as you feel." If that is true then sometimes I feel like a freakin' 100-year old.

I would like to say that I am becoming better with time like a fine wine. But anyone who has drank their share of wine know that even really old wine can suck, especially if it is "corked." The best wine is the one you drink and get a mellow buzz from. Some of these wines have screw tops instead of corks.

I won't say I know what I want to be when I grow up. I do know that I more or less have always wanted to be a writer. And I write. Now granted, I write a blog read by maybe nine people on a good day, but they are good people. And I am becoming content with just writing and not caring what anybody else thinks about the quality of my writing.

You know. What I am really becoming is content. I tried religion, therapy, crystals, affirmations, anti-depressants, co-dependence, self-loathing and more self-help books than I care to shake a preverbial stick at. It wasn't until I finally got married (at aged 47 mind you) that I stopped always focusing on myself and started thinking my becoming may just be enhanced by putting something else before me.

I won't go as far as saying I am totally comfortable when I look in the mirror, but I sleep at night and I get up in the morning. So what if I'm not the president of the United States (wouldn't that be a downer). So what if I haven't written the great American novel (most of the world doesn't speak English anyway). And so what if I am not a household name. While the famous age and then fade into oblivion, screaming to be remembered for who they were, I age and simply am who I am.

I am enjoying starting to enjoy my becoming and be-going.
Posted by Time at 9:33 PM

Wonderful, Tim! Thank you for writing that. I know that your blog is supposed to be the place for snarky responses, but it was nice for me to read such a serious response to the question... and to hear things that I've been thinking - haltingly, and without clarity - said so simply.

Yea, it sure has gotten easier simply "being" what I have become rather than stroking out worrying weather or not I was amounting to anything by some prescribed time in my life. It may be all downhill from here as far as I know, but for the meantime, I'm content to just deal with it as it occurs rather than missing out on the here and now altogether worried about tommorrow, which could be cut short by a killer asteroid, knowing my luck. I agree with Hayden, this was a better post, and not nearly as "snarky" as usual.......grin.

Could it be you're becoming less snarky? [Not my description, btw]

I sort of, kind of disagree in a way. Not that your blog needs a point/counterpoint, Jane you ignorant slut.

I think that becoming as time goes by is inevitable. Perhaps what changes is that we no longer make it a conscious goal. My New Year's goal [I hate resolutions] is to become a better version of myself. I hope this year to become better at knowing that domestic perfection does not exist and to listen to my Mom's old adage of "no one ever steals dirty dishes." Yeah, I know it's a weird saying, but I think it's worth the risk of finding out if it is really true by leaving the dishes every now and then and doing something for myself instead.

I hope this year to become better friends with Tim.

I'm not there yet. There are still things I want to be, do, and see. Maybe I'm too young (or foolish) to be content with just being.

I didn't mean to say TIM is snarky, but that OUR responses have a set pattern, and that pattern is snarky. And I couldn't go there. I couldn't listen to such an open and well-thought out post and summon up even a hint of anything but sincerity in response. I was excusing myself for not playing the Dizgraceland game.

clearly I said it poorly, and I appologize.

Thank you Hayden. Your post really made me think. But I didn't think you were calling me snarky and no appology is necessary. Even if you were, I would likely deserve the description since I tend to provoke that in people. Perhaps it is a defense mechanism. Humor has always been my shield.

THE Michael,
You are a perfect example of someone who seems to be comfortable being rather than tryin to be. And from a blog community point of view, you seem to have done lots of "becoming" in your life.

Miss Bliss,
You are always free to disagree. I put my clay tablets in the closet after I came down from the mountain. But if just being yourself is enough (and I'm not suggesting it means the same as settling or becomin complacent), wouldn't wanting to be a better "you" unnecessary? I like your mom's saying BTW.

Anna, maybe you are there, but you just don't know it yet. Regardless, I don't think accepting who you are becoming comes with the requirement that you give up wanting or doing anything. Being also means particpating and experiencing. You just get to be aware of it more while you are doing it without wondering what the next experience should be.

So we begin the began

Mama mia, mama mia, do you do the Fandango?

That was nice, I too feel like I'm reaching a point of contentment with my older age. I like it.

Thanks Kat, I kind of like it too. I like to think I'm not really getting older. But then I forget what I'm thinking anyway. :)

Most of the crap we thought was important in our youth was not.

Many of the things we think are important now will turn out not to be so.

When we are elderly we will look back on these things and wonder at ourselves and our misconceptions.

We will think to ourselves that now, finally, we have some understanding of what was and what is important.

We will be wrong.

It won't matter, it is believing that we know that makes things interesting.

But, of course, I am wrong about this as well.

Lights, my profound friend, that is the most I've seen you say in one sitting in ages. Thank you.

I know. I've been in a slump. Hell, I'm having trouble writing this. I've rewritten that last line 5 times. And rewrote that one twice. See what I mean. Who the hell wants to read that? Anyway, still with you and still enjoying it. Don't you doubt it.

Finding how contentment neutralizes the frustration of expecting happiness was certainly enjoyment. You so easily develop the point that "human being" is half verb.

Lights,
El Nino strikes again. I hear it is also responsible for rising gas prices and dandriff. Hang in there.

Bradford, Human Being is half verb. I like that. That would explain sportscasters vocabulary as well :)