They call me Mr. Potato Head 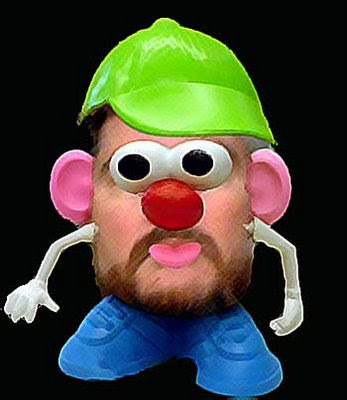 When someone hears I grew up in Idaho, I generally have to endure a tirade of potato jokes. Because there's nothing more people in Idaho or from Idaho like more than a good potato joke. Ha, ha, ha, ha.

But when I think about it, we did eat lots of potatoes when I was growing up in Boise. Idaho was, after all, the "Famous Potatoes" state. Our license plates reminded us of that on a daily basis. Ironically, Idaho probably produced more sugar beets per capita than potatoes. "Famous Sugar Beets" just didn't have the same ring to it. Now I think they have options for license plates with other slogans on them (like "Land of the Skinheads" and "You da pimp, Idaho"). The potato lobby must not be as influential as it used to be.

Potatoes were my father's specialty when he was forced into the kitchen. He loved potatoes. He particularily liked them ground or fried with bologna. I get a bit queesy to this day just thinking of the electric frying pan filled to the brim with gray slices of congealed potato and pink slices of bologna curling up at the edges as they fried in Crisco oil.

His ground potatoes weren't much more appetizing. He'd pull out this old metal hand grinder and attach it to the bread board and then start cranking out the potato pulp. He'd put a pan on the floor to catch the starchy liquid that would drip out of the end of the grinder as he cranked. Then he'd fry up the ground potato in much the same fashion as he would the sliced potatoes. If my memory serves me, he fried them in Crisco, too. My cholesteral level leaps just thinking of it.

Don't ge me wrong. I like potatoes. But I like mine baked or mashed. I like a good potato salad, too, and potato pancakes, but I can take or leave scalloped potatoes. Potato skins frighten me, but for a guilty pleasure, I'll take french fries, tater tots or Sour Cream & Onion potato chips. When I was in Cub Scouts we got to go on a field trip to the Clover Club potato chip factory in Boise. I remember thinking I was in heaven when they let us eat hot potato chips right off the conveyor belt as they came out of the oven.

Oddly enough, one of my favorite meals as a kid was Banquet fried chicken TV dinners with mashed potatoes. I loved the way their mashed potatoes tasted. It wasn't until years later that I realized the reason I liked Banquet's mashed potatoes so much was that they put real butter on top of them. All we ever used on a daily basis was that cheap tub margarine, so real butter was a gourmet treat to me.

One thing I could never stomach were Idaho Spud bars. They were these gross marshmellow things covered in chocolate spinkles and shaped like a potato. They still sell them in Boise, but I think only tourists buy them. These are the same tourists who buy the "Darth Tater" t-shirts and the postcards with the giant potatoes on them.

Regardless, I am not ashamed of my Idaho roots and the potatoes that were attached to them. But ironically the one toy I never did have growing up was a Mr. Potato Head. Go figure.
Posted by Time at 10:57 AM

Email ThisBlogThis!Share to TwitterShare to FacebookShare to Pinterest
Labels: Idaho

I know you can never get enough of good potato jokes ... so how about some bad ones?

Why did the potato cross the road?
He saw a fork up ahead.

Why wouldn't the reporter leave the mashed potatoes alone?
He desperately wanted a scoop.

What does a British potato say when it thinks something is wonderful?
It's mashing!

What do you call a baby potato?
A small fry!

I love potatoes. I'll take 'em any way I can get 'em. I make a killer potato soup with lots of real butter. It's my favorite on a rainy day, which apparently you see plenty of.

Me I too loved mashed with egg milk and cheese and butter.

I would totally wear a Darth Tater T-shirt.

Not in public, of course.

T - I feel you. I too grew up in Idaho and it has made me the spud of many a joke. I have never seen the Darth Tator t-shirt, but my brother-in-law has a t-shirt that shows three separate cells (like a cartoon) with a person mouthing the syllables of I-da-ho. Love that shirt.

I love Idaho Spud Bars! Last time I was back I loaded up on them. They only lasted a week. If you freeze them, they make funny noises as you bite down. The only better candy would be marshmallow peeps dipped in chocolate and rolled in coconut.

I still get a kick out of seeing "Idaho Bakers" at the grocery stores here in Minnesota. Most of the potatoes in Idaho stores were from Washington or Oregon.

Shandi, I forgot all about potato soup! And chowders and stews...potatoes are the universal rainy day food.

Whitesnake, Crocodile Dundee never said anything about spuds on the Barbie.

Lights, I am not a totally bit suprised.

Miss Bliss, If Ida Lupino married Don Ho, she would be Ida Ho.

R. I honestly have never heard anyone say they love Idaho Spud bars, but you were always a few taters shy of a bushell.