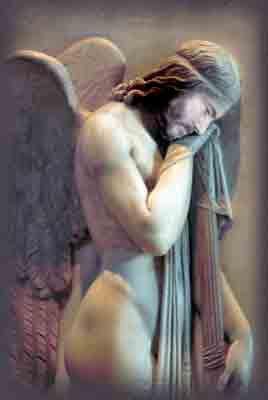 Okay, you get my point. Don't assume that because someone doesn't believe in the same thing that you do that they don't believe in something. And never believe that your belief system is the only one that has any validity. That kind of arrogance will get you your own level of hell (which doesn't exist, but you'll go there anyway because you believe in it).

I believe we all create our own reality (I'm not sure who created George W. Bush, but could you give us a break and pull your head out of your ass). Everything we see, hear, say, do is sucked through that wrinkled gray matter of our own brain and then projected on the screen that is our life. That is the reality of things. If you don't like the script, toss it in the trash and open a new one.

But this time, write a happy ending.
Posted by Time at 9:43 PM

First, I absolutely love the latest photoshop. You have gotten so incredibly good that it's almost scary.

Hell??? It was the first Christian "thing" I abondoned. Of all the crazy ideas, it was the least believable... yet... Everthing else about Christianity hinges on it. If you don't have the ultimate threat, why should people behave themselves?
I think it's part of just being human.

I believe in a lot of different things. I haven't formed many steadfast opinions yet. My mind hasn't been made up. I love that I can image many scenarios and many theories about the meaning of life. This was only possible when I let go of the ONE theory I had been given.

There seems to be a terrible misunderstanding on the part of a great many people to the effect that when you cease to believe you may cease to behave.
~Louis Kronenberger

I agree that we all create our own reality. We're all responsible for our own actions and every choice we make impacts the direction our lives take. And I find it incredibly exciting that we can change directions at any time and in any way.

Shandi,
The thing I love about Buddhism is the believe that there are many paths to enlightenment. When I raised that point with my born again brother he quickly told me there was only one path. You can guess which one that was.

You have discovered what he hasn't. Some times in order to see the light, you have to stop staring into the sun.

And I agree that the concept of hell and heaven were primarily used to control the masses.

Anna,
It is a freeing concept and one that opens up countless opportunities and experiences. One might even say it is a heavenly concept :)

My belief system mirrors what you've written here ... speaking of Quantum Physics, have you seen the movie, What The Bleep Do We Know? ...if not, check it out!
Warm karmic wishes, JP

Tim, are you saying you're a solipsist? I had no idea...

(or maybe I did!--at least I did if I, too, am a solipsist. Although, if I were, I'd never use the word "too" because it wouldn't apply. Right? Right!)

JP, I did see "What the Bleep..." Loved it. I've always subscribed to the "many worlds" theory of Quantum Physics.

Kristy, I think it is safe to assume that you live in your own world. I'm just trying to figure out why I created you in mine.

There's such a difference between "spiritual" and "religious" isn't there? I believe there's something beyond this world, but I won't label it. It is enough to try and live honorably now.

Kat, I couldn't have said it better.

let me start with asking - what is the sculpture/painting you've photoshopped yourself on? Yes, it's amazingly well done, but oh, man - what a remarkable piece of... erhm...art! I could sketch (bad) copies of it all day long. Wish I were good enough to do it well.

All day yesterday the phrase "going to hell in a handbasket" kept running through my reality. What does that MEAN? I don't hear people say it any longer, but it was a favorite with the oldies at home when I was growing up.

Taking myself a step still further out of the norm, I will freely say that I don't understand the fuss about "meaning." It would be comforting -?- to believe in a grand scheme of things, but I don't. Not karma, not angels.

Though I'd like to believe in the angel of the photo.

I find it completely acceptable to be one life form among many, dancing out my little dance of life among a million gorgeous others. We eat and are eaten, and so it goes. No guilt, no anger at "someone" who dealt me a bad hand. Living life as decently as I can because it makes me feel better and love my world more when I am kind than when I am vengeful.

Living to make myself happy - inside - doesn't mean collecting the most toys, but living in decent harmony with my life form and others. It's enough.

sorry that was so long! I do go on!

Hayden,
The angel is a sculpture in St. Paul's cathedral in the Vatican. So by putting my face on it, I am at risk of going to hell (if I believed in one).

As for the grand scheme of things:
“……. To see eternity in a grain of sand and heaven in a wild flower. “ William Blake

And if you would like to read a fascinating book about being one life form amongst millions dancing your dance, I'd suggest the Dancing Wu Li Masters by Gary Zukav.

And always feel free to comment as much as you want.

BTW: Going to "hell in a handbasket" simply means being carried there swiftly without resistence in much the same way that a handbasket gets carried around without much choice in the matter. Scholars also think the phrase caught on more for it's alliterative qualities than its depth.

(that's a lucky thing, since handbags aren't known for being particularly deep!)

thanks for your graciousness when I ramble...which is usually.