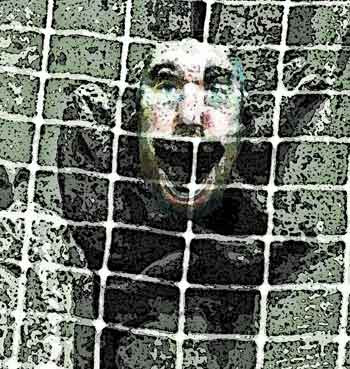 I know many people pooh pooh the power of the moon, but I can't ignore it. And it does bring out the nutcases in Seattle...well more than usual. Yesterday a man was walking down the street in downtown Seattle, dowsed three people with lighter fluid and set two of them on fire (the third beat him off with an aluminum cane).

I don't venture uptown downtown much anymore. I stay in the fringe here in the International District where the crackheads are more predictable. Oh I have to deal with the kilt-wearing geeks that work at Amazon.com, but you tune them out like the camoflage wearing drug dealer who hangs around Tullys coffee shop in a beret eating raw onions.

Life truly is odder than fiction. Which is why I don't understand why people need to make up shit when they blog. All you need to do is write about what is going on around you and you are immersed in about as much fantasy as any one can deal with. Open up your eyes and look around you and you'll never say your life is mundane again. All life is drama.

The moon. It does something to my dreams. I don't get to have those nice bizarre dreams they have in the television commercial with the groundhog and Abe Lincoln playing chess. That would be kind of cool. My dreams during the full moon are filled with Lord of the Ring like quests through amusement parks and swamps. And no, I don't believe in analyzing dreams. Mine have nothing to do with not being breast fed or being frightened by a Zamboni at a hockey game when I was a toddler (don't ask). Mine are just odd and intricate and I'm sure woven by the full moon.

But nevermind. I need to go get a cup of coffee. I hope the camoflage-wearing drug dealer with the beret isn't there. I hate the smell of raw onions in the morning.
Posted by Time at 10:10 PM

I'm sorry the moon wreaks havoc with your mental state and nocturnal thought process, but in all honesty - I love what it does to your creativity. This is one hell of a blog post. Love it.

Too bad we cannot invite outsiders into our dreams because your wacky ones outdream mine by a thousandfold. The last dream I had was that I was trying to cross a street in a lightening storm and my Mother was acting as a shield to protect me. I don't even want to begin to analyze that Freudian doozy.....

I don't believe in analysing dreams either. The moon is nothing to trifle with, she's female.

Being married to a Witch and working in a hospital, I know all to well the power of the moon.
It seems to have much more influence over people already tottering on the edge than those of us who are more or less steady.

As for dreams, well, they get no weirder during a full moon than they already are, which I rarely can remember anyway.

I totally believe in the power of the moon. Although I haven't really noticed any affect it might have on me. I'm messed up enough with all the hormonal stuff.

Miss Bliss, Blogs are dreams we invite outsiders into.

Anna,
I think the moon will affect you in positive ways. Call it a hunch.

A black cat moans,
When she's burning with the fever,
A lone wolf howls,
When he's lonely in the night,
We all start to do go crazy,
With thought of retribution,
The moon starts weeping,
When we're sick and tired of life.

Whitesnake, I see they also have full moons in Australia.

Tim, I don't know if it's cause of the hormones or what, but your reply to my comment made me get all teary... in a good way. Thank you.

Anna, I'm glad it was in a good way because that was exactly the way it was intended. :) I wish you the best!

I can't believe no one asked.

yeah yeah, you said don't ask about the zamboni, but when has asking us not to ask ever slowed anyone down?

so ok, I'll ask. WHAT HAPPENED?

/me does the Jedi mind trick on Hayden. "Move along. Move along."

FP, Thank you...that actually made me laugh. And I really needed to laugh right now.