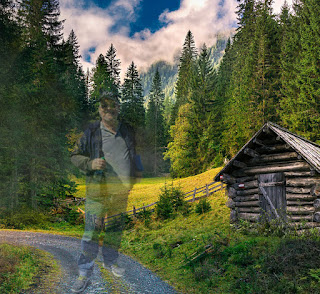 I will be the first one to admit that there is nothing striking about my physical presence. I'm not young or particularly good lucking. Heredity has not given me an athletic build either. I'm not tall. I'm not short. I'm not a big man nor a small one.

If you walked into a room full of people, you would very likely not notice me. I doubt any of the people who I commute with on a regular basis via the train would be able to tell you I am a regular commuter.

It is not my intent to just blend in, but I do. I guess if the truth were told, I wouldn't want to stick out. I don't particularly like to draw attention to myself. I never have.

I do fancy myself as being a writer. And if I were to garner any attention to myself I would want it to be for my writing. If people like your writing, they don't care what you look like. I imagine if I were a famous writer, I would take the same path as J.D. Salinger or other reclusive authors. I can tell you that you wouldn't catch me at a bookstore doing any readings of my latest work. For one, I think my work is best read silently to one's self.

I also think it is better to create a sense of mystery about yourself if you are a writer. Years ago I wrote about meeting one of my favorite authors (at least back then) Mark Helprin at a book signing. I'd built him up in my mind as being this mystical figure imparting wisdom to his followers. I left the book signing disillusioned. I don't think I've read any of his books since.

A lot of the times when I'm writing I halfway pretend I'm talking (writing) to a friend who actually enjoys my company and my stories. That used to be easier when I had a larger group of people who commented on what I'd written. These days it feels more like I'm sitting in a room muttering to myself.


I watched this film last night called Entanglement.  It was an independent film about a man who tried to kill himself after his wife left him. He fails, but gets caught up in a search for "sister" he almost had that gives him a reason to go on. The almost sister was a person his parents had been adopting. But on the day they were to receive their adopted daughter the mother discovered she was pregnant. The adoption was cancelled.

Anyway the character gets caught up in this concept that everything in your life happens for a reason and everything is connected. There is a long discussion of something called Quantum Entanglement (a physics phenomenon which occurs when pairs or groups of particles are generated or interact in ways such that the quantum state of each particle cannot be described independently of the state of the other(s), even when the particles are separated by a large distance). In simpler terms, it is a theory that you can be connected to someone or something and influence and be influenced even when you have no physical interaction.

The movie applies this theory to the man's romance with the woman who would have been his sister. That's all I'm going to reveal.

I liked the movie. I'm always a sucker for anything related to Quantum Physics. It made me think about how everything that happens in our lives does have an impact in some way on us or our environment. And it helps me to think that, rather or not anyone reads what I write or pays any attention to me, I am somehow helping to shape the quantum reality of at least my world.

In some ways that makes me kind of godlike. Or maybe more accurately an entangled photon particle.

And it explains why I always blend in with the scenery.