The blog is a jar 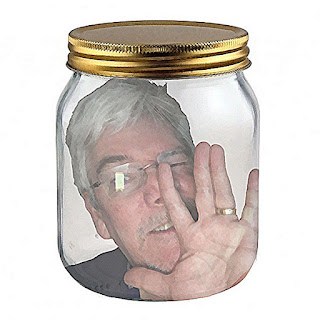 I started feeling inadequate the other day because Ze Frank, my new Internet hero, has thousands of followers, millions of views, 10s of thousands likes and has actually been asked to give TED talks.

After 14 years of blogging, the best I can do is get 34 people to follow me.

But then I rationalize and rehash the reasons why I have achieved no following or viral fame. Ze Frank does what he does for a living and has resources to promote his videos and projects. I blog as a hobby. I put absolutely no resources into promoting it other than free promotions offered me by Facebook in hopes that I'll then be lured into actually using my own money to promote my blog. I've tried using Twitter and Instagram to promote the blog, but again, I don't do paid promotion.

But why should I promote my blog? I don't sell anything. I've dabbled with Google ads and Amazon ads on my site, but my traffic is so pitifully low there is nothing to attract advertisers or to generate ad revenue.


For 14 years I've coasted along on the assumption that word of mouth would promote my blog. I've had blog friends try and promote it to their friends (thanks Baggy). But still traffic to my blog remains amazingly low. It's kind of like my dealings with wood. If I want to get rid of it, no one will take it. But if I want to hold onto it, people all of a sudden want to steal it.

Maybe that is the key, I should try and drive people away from my blog with "Don't click here" campaigns.

Though I wonder if I would really want the attention I'd get if my blog suddenly was "discovered." Nothing brings out haters like popularity. And the public is fickle. They like something today and loath it tomorrow. This is especially true on the web. So I am not sure I have the disposition to deal with becoming a minor celebrity on the Web.

When people used to comment more on my blog, I always responded. I'm not sure that is possible (or wise) if I were to start to generate hundreds of comments. And when I could no longer keep up with the comments, I'd be afraid people would be offended and stop reading because they thought I thought I was too good to respond to them.

When it comes down to it, my introverted self doesn't do well with too much attention, especially if it includes criticism. So I think I am better off that I am cruising along under the radar in my self-contained blog that is like a jar, safely preserved with the lid tightly closed.

After all, if the lid came off, I think it would go bad pretty quickly.
Posted by Time at 3:07 PM

Oh, I feel your pain! I'll do my best to drive potential readers away.

Thanks Baggy, it seems to be working.