That was then, this is now

I was inspired by Internet performance artist Ze Frank's book, Young Me, Now Me: Identical Photos, Different Decades to create the above photo. The young me on the left was five years old. The photo strip was taken by a product demonstrator in Skaggs Drug Store in downtown Boise in 1963. It was an early Polaroid Camera that produced the photo on the spot.

The old me on the right was produced with my iPhone and a bit of Photoshop 55 years later. Other than the glasses, beard, gray hair, a few more chins and a bigger head, I don't think I've changed much. My ears don't stick out as much, though they have gotten a bit longer.

I discovered Ze Frank by watching some of his True Facts videos on Facebook and then YouTube. At first I thought they were serious documentary films about various obscure animals. But I quickly discovered that Frank is a comic genius and the videos are full of quirky commentary that is laugh out loud funny.

Frank has done many Web projects that showcase his own hilarious brand of humor. He has also appeared on several TED talks.  He is currently the chief of research and development for BuzzFeed.

From what I've seen of Frank's work, he has a remarkably similar sense of humor and has produced many projects that remind me of my journey with Dizgraceland and the Web. For example, I Photoshopped my face on an echidna back in 2007.  Frank featured an echidna in one of his True Facts videos about Pangolins. And though I haven't been a speaker on a TED talks, I do have a brother Ted. We just don't talk much. 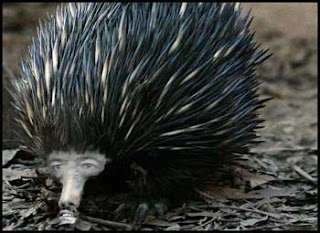 I think the main difference between Frank and I is that he is  successful. Oh and  he has thousands of followers...okay maybe more than a million follow True Faces. About 56,000 follow him on Facebook.

At last count 29 people follow my blog and a whopping 34 follow Dizgraceland on Facebook. But I've only been blogging 14 years. I'm thinking that gap between Frank's huge following and mine is closing...slowly...very slowly.

Regardless, I greatly admire Frank's work and happy that he has realized my dream of making people laugh at his work on the Web...and I mean laugh because it is funny, ha, ha, not laugh AT his work.

I do wonder what kind of name Ze is though.

Not that there is anything wrong with it.
Posted by Time at 4:06 PM